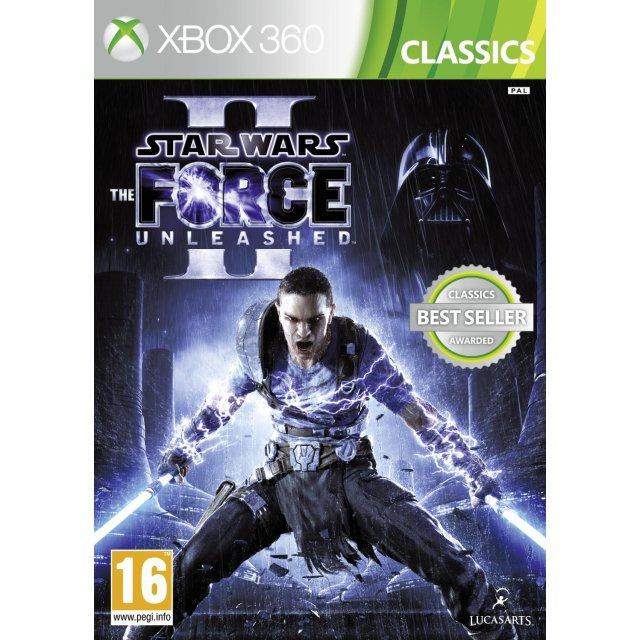 sold Out of print / Out of stock.
Manufacturer
LucasArts
Compatible With Xbox360™, Xbox One™
Version


Click on a thumbnail to see more pictures for Star Wars: The Force Unleashed II (Classics)

The Star Wars® Saga continues with Star Wars: The Force Unleashed II, the highly anticipated sequel to the fastest-selling Star Wars game ever created, which has sold more than seven million copies worldwide. In Star Wars: The Force Unleashed, the world was introduced to Darth Vader’s now fugitive apprentice, Starkiller—the unlikely hero who would ignite the flames of rebellion in a galaxy so desperately in need of a champion.In the sequel, Starkiller returns with over-the-top Force powers and embarks on a journey to discover his own identity and to reunite with his one true love, Juno Eclipse. In Star Wars: The Force Unleashed II, Starkiller is once again the pawn of Darth Vader—but instead of training his protégé as a ruthless assassin, the dark lord is attempting to clone his former apprentice in an attempt to create the Ultimate Sith warrior. The chase is on – Starkiller is in pursuit of Juno and Darth Vader is hunting for Starkiller.With all-new devastating Force powers and the ability to dual-wield lightsabers, Starkiller cuts a swath through deadly new enemies across exciting worlds from the Star Wars films - all in his desperate search for answers to his past.

If you are familiar with Star Wars: The Force Unleashed II (Classics), why not let others know?

[This review is based on another version of this product]
Gamer N64 (24) on 16, Nov. 2010 08:29 (HKT)
Surprisingly good
The fully voiced lines from the actors are well delivered, and, unsurprisingly, the weapon and environmental sounds are good.

The touch controls work well, the combat is fun, and the visuals are good for a DS game. I was a bit disappointed by the lack of 3D cutscenes like there were in first Force Unleashed for DS

The biggest drawback is that the game is really short.