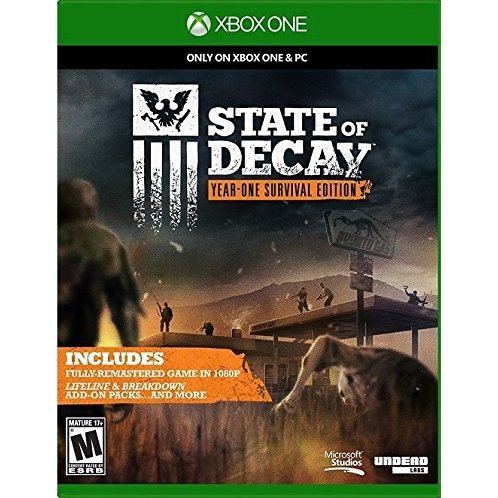 
Click on a thumbnail to see more pictures for State of Decay: Year One Survival Edition

Relive the ultimate State of Decay experience with loads of new features, improvements, and an entirely new remastered content for fans and new players to overcome. Previously released as an Xbox 360 and PC game back in 2013, State of Decay is back with its definitive release on the Xbox One via Year One Survival Edition.

State of Decay comes with all first-year content completely remastered in glorious 1080p and made even better with sharper textures, improved lighting and shadows, a refined user interface, and a more polished environment details as well as animations and combat mechanics. Explore the world of State of Decay as players strive hard to survive the zombie apocalypse in the fictitious Trumbull Valley, where players must build a band of survivors under your control to stay alive long enough to escape.

Year One Survival Edition comes with all previous Add-Ons and all the DLC – Lifeline and Breakdown, new mission types, new vehicles and weapons, new music from SOD composer Jesper Kyd, a new playable character (exclusive for who played the original game on PC and Xbox 360), and community improvements. Players can also now unlock their favorite characters from “Lifeline” to play in “Breakdown” with a set of new challenges and missions. Test your survival skills and overcome hordes of zombies in this open world zombie-survival fantasy game, State of Decay.

If you are familiar with State of Decay: Year One Survival Edition, why not let others know?