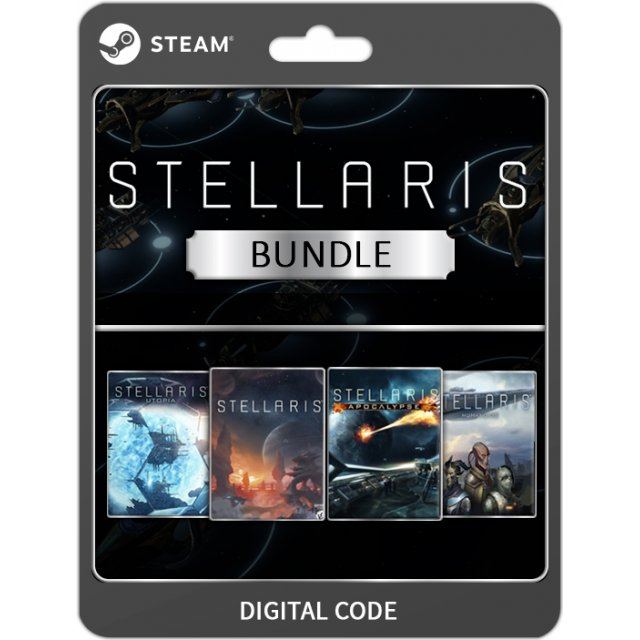 Stellaris
Explore a vast galaxy full of wonder! Paradox Development Studio, makers of the Crusader Kings and Europa Universalis series presentsStellaris, an evolution of the grand strategy genre with space exploration at its core.

Featuring deep strategic gameplay, an enormous selection of alien races and emergent storytelling, Stellaris has a deeply challenging system that rewards interstellar exploration as you traverse, discover, interact and learn more about the multitude of species you will encounter during your travels.

Etch your name across the cosmos by uncovering remote celestial outposts, and entire civilizations. Will you expand through war or walk the path of diplomacy to achieve your goals?

Stellaris: Apocalypse [DLC]
Afull expansion which redefines stellar warfare for all players with a host of new offensive and defensive options. Destroy entire worlds with terrifying new planet-killer weapons, fight against (or alongside) ruthless space pirates, and maybe discover a few non-violent game features as well.

Stellaris - Humanoid Species Pack
Humanoids Species Pack will feature a selection of new portraits and ship models for players who wish to forge their path among the stars as the irrepressible human race – or at least as a species that resembles humans to some degree. Humanoids, the most-played phenotype, now gain more variety and will finally get their own unique ship class, inspired by the classics of Western science fiction. The pack will also include three music tracks, remixed by at least one human, and will also add three new voiceover sets for digital advisor VIR that will hopefully humanize him at last.

Stellaris: Utopia
The stars have called you for millennia and now you walk among them. A universe of possibilities is open to your species as it takes its first fitful steps into the great unknown. Here you can turn your back on the divisive politics of the home planet. Here you can build something new. Here you can unify your people and build that perfect society.

Only in space can you build Utopia.

Utopia is the first major expansion for Stellaris, the critically acclaimed science fiction grand strategy game from Paradox Development Studio. As the title suggests, Utopia gives you new tools to develop your galactic empire and keep your people (or birdfolk or talking mushrooms) happy. Push your species further out into the galaxy with new bonuses for rapid exploration or stay closer to home before striking out against all who would challenge you.