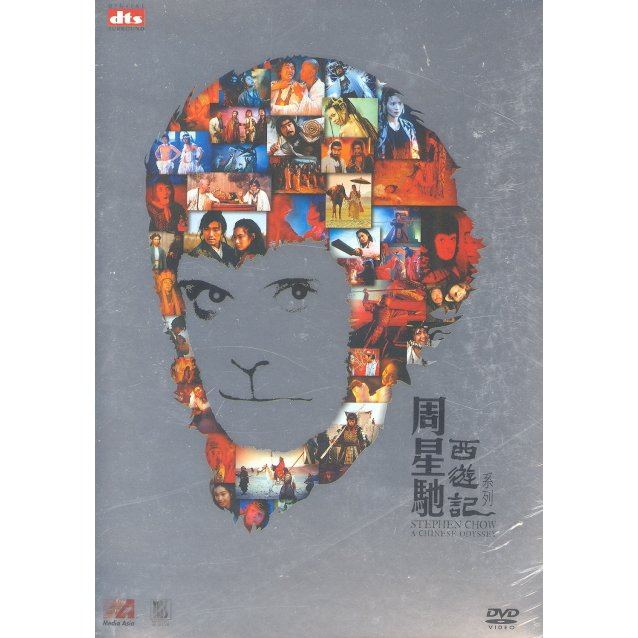 Stephen Chow's A Chinese Odyssey, director Jeff Lau's epic two-part retelling of the legend of the Monkey King, greatly enhanced Stephen Chow's international profile. The role as Monkey King earned Stephen Chow his first acting award, from the Hong Kong Film Critics Society, and further demonstrated the existence of the actor beneath the comedian. These two movies, Pandora's Box and Cinderella, HD Restored and remastered, now comes in a stylishly designed boxset. Interview with director Jeff Lau, English subtitled, and also a 64-page hardcover photo album also come with this new edition.
A bold reinvention of the classic A Journey to the West, the two films follow the adventure of Joker (Stephen Chow), a scruffy Ancient Chinese gang leader who's really the reincarnated form of the Monkey King. Two evil sister demons (Yammie Lam and Karen Mok) nudge Joker in the correct direction and complete the Journey to the West. Part 2 starts with Joker (Stephen Chow) just discovering that he is, in fact, fated to be the Monkey King. But he is much more concerned with traveling forward in time to save his wife, one of the sisters who used to be his enemy, from certain death. Unfortunately, he's indentured to the beautiful, but schizophrenic Zixia (Athena Chu), who's bent on becoming Joker's true love! But to finally become the Monkey King, Joker must cast off all human desire. Can he forsake human love to save his Master, the Longevity Monk (Law Kar Ying)?
A Chinese Odyssey blends costume pageantry with gorgeous scenery and some fabulous action sequences from action choreographer Ching Siu Tung (Hero). Stephen Chow turns in a hilarious and emotionally moving performance to offer a costume comedy adventure unlike any you've ever seen!

If you are familiar with Stephen Chow A Chinese Odyssey Series, why not let others know?

[This review is based on another version of this product]
gundamalpha (181) on 12, Dec. 2011 16:08 (HKT)
Best Stephen Chow movie.
I just started into BD and this is on top of my list. It's so good that I can even memorized the dialogues after watching so many times, and still not tired of it. The BD incarnation definitely improves the watching experience, whether you have watched it or not.
[This review is based on another version of this product]
akhim24 (106) on 17, Feb. 2011 23:33 (HKT)
very funny movie, like it so much
sweetiecat13 (110) on 05, Jan. 2011 18:55 (HKT)
The Best ever by Stephen....
The best movie from Stephen chow till date,A must have boxset for his crazy Fans.Story & acting is fantastic...2nd to Bluray quality..
MrDH (1) on 08, Jun. 2010 17:17 (HKT)
the Korean subtitles are totally CRAP!!
I'm biggest fan of Stephen Chow, and "A Chinese Odyssey" is one of my favorite movie. But the Korean subtitles are totally CRAP!! you can 'never' understand the movie with this subtitles. strange grammar, strange spelling. What was worse, 'wife' is translated into 'sister'. OMG! I really really disappointed..
[This review is based on another version of this product]
shinogu (6) on 17, Mar. 2010 09:28 (HKT)
Pretty.... good...
Having "A Chinese Odyssey" on Blu-ray was a nice novelty for me, if anything. The english subtitles have serious grammatical errors, which is probably to be expected. I grew up watching this movie many times so I know the story, but it'd be a problem for people without any chinese know-how. The picture quality is pretty good, at any rate.