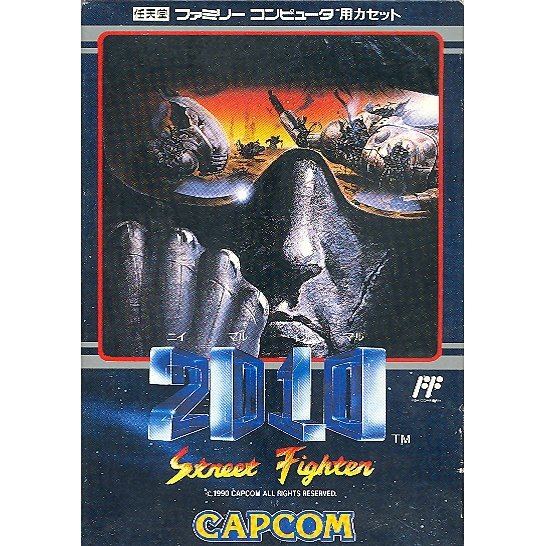 Capcom
Compatible with Famicom™ / NES™ (FC)
For JPN/Asian systems only.

Street Fighter 2010 is actually the first actual sequel to Street Fighter. It is also a very different Street Fighter game to what you are used to. Obviously the game is supposed to be set in the future (2010 must have seemed a long way off when they made this) and you play a sort of cybernetic Ken.The game is more of a shoot-em-up than a beat-em-up, but it still follows the basic one-on-one formula of the original Street Fighter game. However this time your enemies are aliens and it's up to you to stop them (from whatever it is they're doing - they just seem to be on vaction really). The alien enemies range from flying scorpion things to flying blob things and, unlike the original Street Fighter characters, these don't return in the Alpha or versus series (crap).Platform game elements have also been included into the gameplay. The fighting arenas consist of many platforms, which Ken can jump from in the fight. Since the enemies can fly and Ken can't (his shotokan training hasn't reached that level yet), he needs to climb all over the place to avoid being hit. Ken fires some sort of fireball from his arm, which is his only real attack. It can be aimed in all directions but has a limited range. Items are hidden around the stage and some of these increase the range of the fireball.As this game was only released on the NES and never appeared in the arcade you should know what to expect with the gaphics and sound. It makes the original Street Fighter game seem like it was made several years later. But then this is Street Fighter in name only and is not the official sequel (which, as we all know, is Street Fighter 2). It's fun for a couple of minutes until you decide it's too difficult and quit. One for collectors of NES games - or something.

No reviews for Street Fighter 2010: The Final Fight yet.