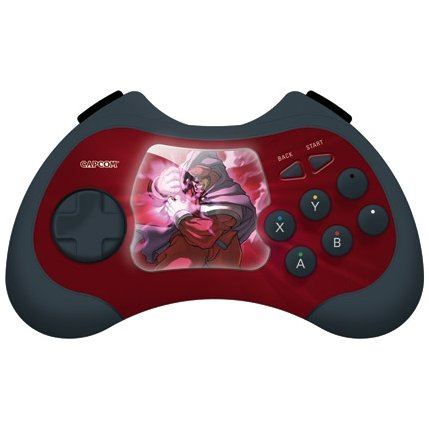 Nuby
Compatible with Xbox™
Get informed when this item is in stock by using our Personal Agent from the right.

NubyTech has created these Limited Edition Street Fighter Controllers to celebrate the return of Street Fighter – the most dominant 2D fighting game in its genre.. With a different controller for each character, these controllers look like nothing else on the market. Designed specifically for Street Fighter, the controllers feature a three image lenticular display in the center of the controller, depicting M. Bison in motion with spectacular images provided by Udon, publishers of the popular comic book series. Street Fighter and fighting game fans will also appreciate the 6-button arcade style layout on a hand held game pad, providing superior ergonomics for this style of game play.

If you are familiar with Street Fighter Controller - M. Bison, why not let others know?

ryutenmen (2) on 03, Aug. 2006 02:18 (HKT)
Sega Saturn a great sistem
I want one of this, looks fantastic (sega saturn like), this controler is AWSOME, if i coud buy i will buy right in this second...my rating for this controler is \"6\"
dankicksass (1) on 16, Jan. 2006 16:51 (HKT)
Great for Emulation!
I picked one of these up today and modded the breakaway cable to USB so I could use it with my PC, but if I want to use it on an Xbox, I can just swap out the breakaway. I absolutely LOVE it for playing classic games. It has a very old school feel to it, but with a fresh look. The graphics on the box and controller are spectacular, and the comic book is totally rad! I played Street Fighter for Genesis with it, and it just felt so right! The D-pad and other buttons feel very solid, so I think this controller will last me a long time. I\'ve always liked Nuby\'s products. I\'ll definitely be picking up another one of these Street Fighter controllers for Xbox! (Probably Guile!)

If I were to change anything about the controller though, I would change the surface finish for the grey/blue part of the body and the D-pad and buttons to a textured surface. They are shiny smooth surfaces now, which is okay, but I would prefer a textured surface myself, or at least a less-slippery surface. The back of the pad is actually perfectly surfaced, like a GameCube controller is.
lrvz (3) on 09, Jul. 2005 13:28 (HKT)
Not functional, but pretty.
I was very disappointed by this controller. When I first saw it I had high hopes for it. I was expecting near Saturn controller quality. Boy was I wrong. The controller does not even perform to the level of its PS2 counter parts. It feels cheep and the directional pad is a nightmare. I was not able to consistently pull of special moves. I was better off with the stock S-controller. But the packaging is nice and it does bring an Udon comic. If it were priced at $10-$15 I would probably purchase all 3 of them just to collect them, but never to use as a serious fighting pad.