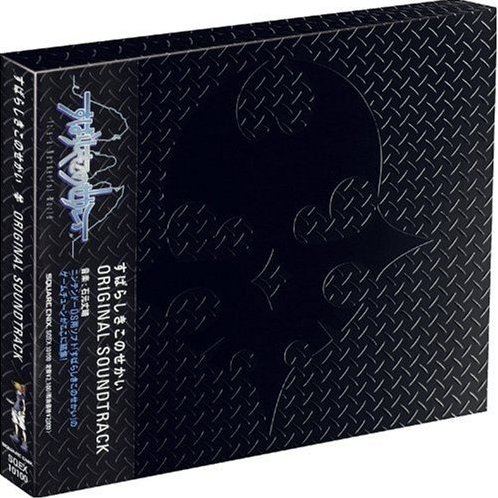 Audio CD
1w Expected stock arrival within 1 week.
US$24.99
Please take note that, once purchased, this item must be paid immediately and cannot be cancelled or returned.
Manufacturer
Sony Music
Feature
Takeharu Ishimoto
Rated By Our Customers
Version

If you are familiar with Subarashiki Kono Sekai: It's a Wonderful World Original Soundtrack, why not let others know?

blackenedfury (1) on 13, Dec. 2012 09:15 (HKT)
Awesome Soundtrack
Loved this game and its soundtrack. Has most of the songs from the game in their full versions making them much more enjoyable. I highly recommend this soundtrack and the game if you haven't played it yet.
skypioneering (1) on 24, Apr. 2012 20:30 (HKT)
Love it.
The music is quirky, but I love it. This is an item you should only buy if you thoroughly enjoyed the games soundtrack.
TWEWY is a game I hold a special place for so I am satisfied with my purchase. The songs in this game are among my favourites.
And hey, it comes with song lyrics!

Be aware that a couple of tracks are missing. Off the top of my head, Transformation and Owaji (in English) aren't on the disc.
ncxytmlx (8) on 23, Nov. 2011 12:40 (HKT)
Excellent
If you like the soundtrack while playing the game, get this! It doesn't have the "noisy background crowd" while in game, this lets you enjoy the songs as they are meant to be.

If you can afford it, get both soundtracks! You won't be disappointed!
Lettuces (36) on 07, Mar. 2011 18:21 (HKT)
Complements the game perfectly.
I'm a huge fan of the game and found myself humming the tunes to myself repeatedly - the songs never get old and this soundtrack is also a strong standalone CD to people who haven't even played the game!

It has lots of hip hop and electronica influence and Twister is like the most memorable opening game song for me!
ricardoramirez (175) on 03, Mar. 2011 12:18 (HKT)
A DS Game with a great soundtrack
Often people think portable games can't have soundtracks that compare to their home console games but this one, despite being on the DS, delivers an excellent soundtrack.

On top of that the box is even a nice touch.

I would go so far as to even recommend this soundtrack to those that have never even touched the game.
1 »