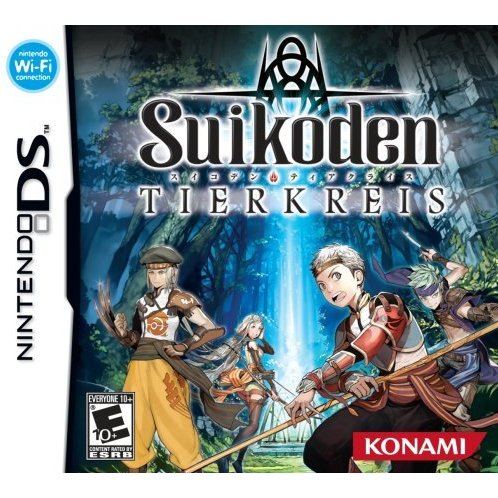 Konami
Rated
By Our Customers
Compatible with Nintendo DS™ (NDS™)

Suikoden: Tierkreis is the latest iteration of the popular RPG franchise that was introduced more than 12 years ago. Suikoden: Tierkreis follows the story of the 108 Stars of Destiny, a group of magical warriors, as they challenge the almighty One King, who intends to create chaos in the universe. As the player gathers the members of the 108 Stars of Destiny, the forces for good will stand up against evil in a battle that spans the near infinite parallel worlds of the Million World universe.

Valkyrie Profile: Covenant of the Plume
US$ 34.99

If you are familiar with Suikoden Tierkreis, why not let others know?

my_name_is_yada (122) on 15, Nov. 2016 14:49 (HKT)
great
epic story and game play
iantay (32) on 04, Jan. 2015 00:50 (HKT)
What an Epic RPG
I've always been a fan of the Suikoden series. This game was no different. I loved the story, the gameplay the game world and the characters. It's amazing how they can pack such an epic RPG game into that little tiny cartridge. The characters are all voiced, the anime cutscenes does an awesome job to flesh of the action sequences, while the world design just sucks you in. Portable games/rpgs like these are pretty hard to come by nowadays. A must have in your portable collection.
balmung1 (23) on 24, Jan. 2014 16:01 (HKT)
awesome game
this game have beautiful visual and great musics and voices.
you can choose your language french,english,spanish
so many hours, if you like j-rpg it's for you.
danualwaysplay (568) on 15, Jan. 2010 13:09 (HKT)
Suikoden now on DS
Suikoden is a great stories on PS2, now it comes to DS "yeepe"
bruce.bane (2) on 17, Dec. 2009 11:15 (HKT)
Top Tier DS RPG
This is one of the best RPGs on the DS. The 3D sprites combined with beautiful 2D backgrounds makes full use of the DS capabilities unlike most RPGs still using SNES era graphics. Battle animations are OK, however spell animations are limited and unimpressive, although some combine attacks can be fun to watch.

The story is pretty standard, hero saves the world from evil king trying to rule it. The moral story added to that, a predetermined future vs free choice becomes boring and painful by the end of the game - you will want to shut the game off everytime the hero says "We won't know until we try". That was a bit disappointing, however the world Tierkreis is based in is fleshed out well by the wide range of support characters. Most of the 108 stars of destiny have a side story and character development which fleshes out the world away from the main plot line.

Voice acting ads depth to the characters (including the hero this time unlike past Suikoden titles) and is used often throughout the game. The hero speaks too fast early on, which is annoying. Fortunately you have text to fall back on. Some of the core characters feel more like exposition rather than character development, but there are plenty of other options to fill your team with 108 stars of destiny to choose from.

The battle system is simple, but fun. Turn based action but without elemental weaknesses. Instead weapons have different types of damage. Bash, Slash and Pierce. Enemies are usually weak to one of these and resistant to other so you will spend the game balancing your party with these. Characters also have a list of skills which increased as the game progresses, only 4 of which you can bring, although most are direct upgrades of others and so which one to bring is usually obvious. Magic in this game is pretty ordinary and no weaknesses are used so it's just a different way to deal damage. Leveling new characters is usually easy and not grind intense, allowing you to switch up your team often with minimal penalty. The lack of New Game + is a disappointment, especially with so many miss able characters and events.

The trade mini game is a fun and interesting way to make money (basically the only viable way to make money). Travel is done through menus unless you are in a dungeon or traveling a region for the first time.

Suikoden Tierkreis is an impressive RPG for the DS, finally showing us you can use 3D graphics and have a beautiful world fleshed out with 2D backdrops. Some characters lack in real development but with 108 something had to give. The story is hardly revolutionary but it does have its shining moments. Gameplay was fun and combat rarely got boring with the minimal grind involved. If you want a good RPG for the DS and want something which does things differently from the crowd of DS RPGs, pick up Suikoden Tierkreis. It's worth your time and money.
1 »