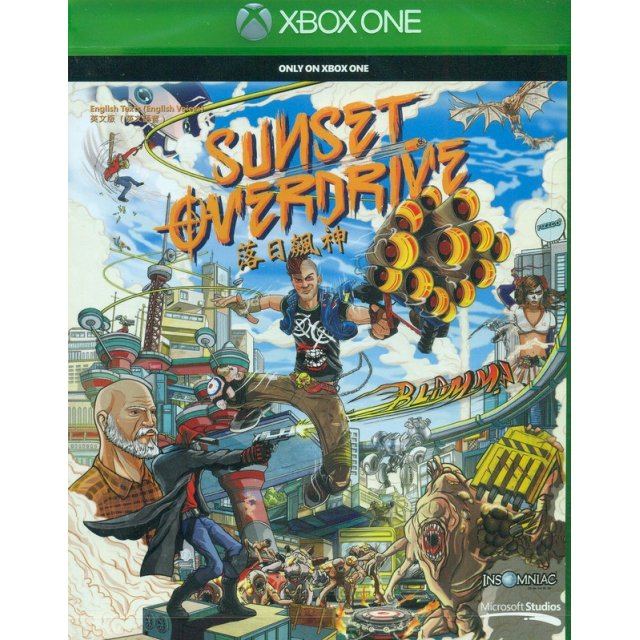 - “Nothin’ but the Hits” gun: An overcharged version of the High Fidelity gun that launches limited edition, priceless, multi-colored vinyls that do increased damage.
- “It’s Me! Fizzie!” outfit: Fizzie is more popular than you because he has a great marketing budget. So, why not dress up as him and get in on some of that fame?
- “Hardcore! Hammer”: You ponder buying the Day One Edition of “Sunset Overdrive.” A spot check reveals that if you do, you can equip a mighty hammer made from a bat and spiked dumb-bells. You buy the Day One Edition of “Sunset Overdrive.”

Middle-earth: Shadow of Mordor - Game of the Year Edition
US$ 22.19

If you are familiar with Sunset Overdrive (English), why not let others know?

[This review is based on another version of this product]
75c (419) on 15, Aug. 2016 11:35 (HKT)
awesome game
awesome gameplay, nice cell shading graphics. pity not at full 1080p 60fps
[This review is based on another version of this product]
mysticdefender@live.com.au (53) on 30, Dec. 2014 05:02 (HKT)
One of the best games for 2014
Looking for a realistic game? Stay far away from this one. Looking for something really fun in ridiculous measure? You just scored. Had tons of fun playing, finally a game with next gen graphics that's actually good. Old school gamers will like the sometimes a little too cheesy but still made me laugh humer about gaming in general. The punk rock vibes were sweet too. Not for tools that only play stuff like COD. For real gamers with soul that are down with something ridiculous for the sake of fun. Plays like a Jet Set Radio game a little bit where you grind and stuff but have to kill while you do it. Sweet!
[This review is based on another version of this product]
coldice (266) on 26, Nov. 2014 19:14 (HKT)
Fun Energetic Open World Adventure
Insomniac games delivers one of their most unique and energy fun filled open world game which they will now be defined as. This is one of their best (if not THE best) game they have made yet.
[This review is based on another version of this product]
phooart (271) on 22, Nov. 2014 13:38 (HKT)
Sunset Overdrive (Day One Edition) (Xbox One, US version)
Awesome open-world game! Must own!