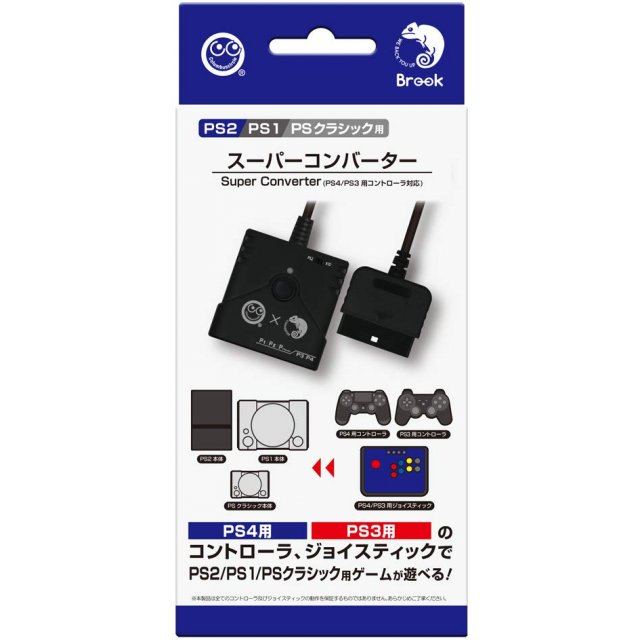 Columbus Circle
Rated
By Our Customers
Compatible with PlayStation 2™, PlayStation™

Japan
24h In stock, usually ships within 24hrs. (Only 1 left in stock.)
US$53.99
Limited time offer - Secure yours now before the offer expires!

Manufacturer
Columbus Circle
Rated By Our Customers
24h In stock, usually ships within 24hrs
(Only 1 left in stock.)
Price
US$53.99
Our previous price:
US$ 57.99
You save:
US$ 4.00( 7% )
Play-Asia.com Return & Refund Policy
Trustpilot
Trustpilot
Click on a thumbnail to see more pictures for Super Converter for PS Classic / PS1 / PS2

Note:
- This may not run properly to other PS4 & PS3 controller.
- PlayStation controller & console are not included.

Mobile Suit Gundam: Extreme VS (Playstation 3 the Best)
US$ 9.99

Super Converter for PlayStation 4 and Nintendo Switch
US$ 59.99

If you are familiar with Super Converter for PS Classic / PS1 / PS2, why not let others know?

[This review is based on another version of this product]
ghostlyavenger (47) on 29, Aug. 2019 06:39 (HKT)
great adapter
works as intended, if you update the firmware it also works with the xbox one controller for both switch and ps4. Nice to have options.
Ps. If you are using XBO or wiiu pro controller on the ps4 the shortcuts for share are minus+L and for touch minus+R.
[This review is based on another version of this product]
linandrew881 (1) on 27, Aug. 2019 01:29 (HKT)
Works great on both Switch and PS4!
I bought this because I love the Switch Pro Controller and really wanted to use it on the PS4 as the Dualshock doesn't feel comfortable for me after awhile. Instructions were all in Japanese but it was all pretty intuitive to sync up. Just press the big red button until it flashes then hold the Sync button on your controller and you're good to go!

I was also able to successfully connect a Dualshock controller to the Switch. There's a few things to know to get it to work, but once you change the settings it works flawlessly. First to sync the controller to the converter you need to hold the Share and PS buttons together, the lightpad should flash and then sync after awhile. Next I found you have to change under System Settings > Controllers and Sensors > Pro Controller Wired Communications and turn that option on. Then the Switch should be able to find it when you go to "Change grip/order."
[This review is based on another version of this product]
punkysuen (1) on 31, Oct. 2018 08:33 (HKT)
easy to use
No need to setup, just plug and play. It supports my wireless joystick Qanba Q1W.
[This review is based on another version of this product]
forteii (66) on 07, Aug. 2018 06:16 (HKT)
Great for SNK fighters
Plug 'n play - no errors while playing. Tested for many hours on Samurai Shodown VI (PS4) and both KOF '98 Ultimate Match and KOF 2002 Unlimited Match (Steam) . I only wish it weren't this pricy.

There is one caveat that might seem obvious to some, though. The touch screen buttons exclusive to the PS4 controller don't seem to be mapped on the PS3 counterpart whatsoever ; so for those functions you will need to switch back to the PS4 controller. Overall, a small annoyance imho.
[This review is based on another version of this product]
Armil187 (1) on 12, Jul. 2018 14:20 (HKT)
Pocket Rumble with MadCatz TE2+
I have purchased the Brooks PS4/PS3 to Switch Converter from Play-Asia and I was happy with the Delivery Duration and Packaging. After I tested it and worked fine, I decided to order again but this time the PS3/PS4 to Xbox One Converter knowing that this online store is reliable.

I tested this on my MadCatz TE2+ connected to my Nintendo Switch and played Pocket Rumble. It looks like an overkill but it feels great. I don’t feel any lag too. After playing with Pocket Rumble for an hour, I decided to try it out on Ultra Street Fighter 2… awesome! I don’t have any negative comments whatsoever. I am a happy customer.

Probably we need to lower the price a bit because at that price (add a little more) we can purchase a full Mayflash Arcade Stick.
1 »