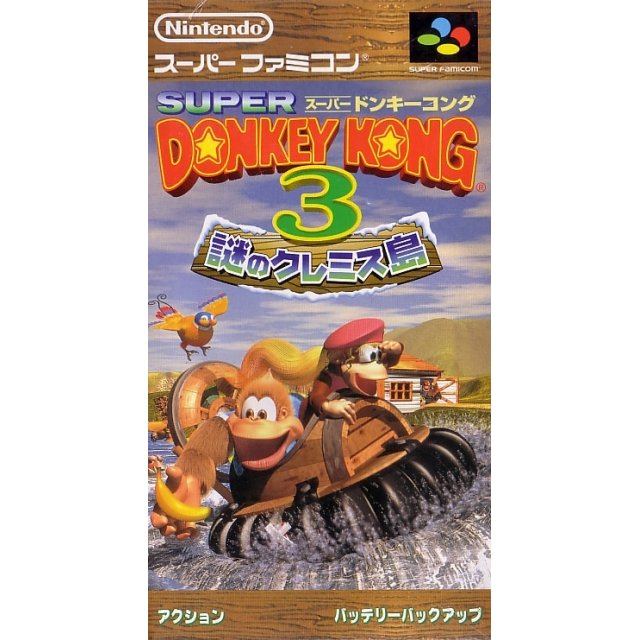 Rare
Rated
By Our Customers
Compatible with Super Famicom™ / SNES™ (SNES)
For JPN/Asian systems only.

If you are familiar with Super Donkey Kong 3: Dixie Kong's Double Trouble, why not let others know?

The graphics in the Donkey Kong series were always ahead of their time. It's like Nintendo Gamecube graphics, but always shown in the 2-D side. I guess this is one of the games where all sprites were 3-D rendered. The characters move very smoothly, the backgrounds are very well drawn and colored and is very appealing to look at.

The controls were perfect! The controls are very responsive and and are very easy to get used to. You use 'Y' to run and 'B' to jump. 'A' does the tag team thing. If you are controlling Dixie and have Kiddy jump on you, you can't throw very far, but Kiddy can break the ground sometimes. If Kiddy picks up Dixie, she can be thrown quite far like in #2.

The sounds and music were all very appropriate for this game. I didn't much like the soundtrack like I did in #2, but the sound track is still good. All the ambiances and noises were pretty good which do a really good job of bringing you into the game like you are really there.

The gameplay itself and story was pretty good too. The stage designs were all unique and never felt like I was repeating the same stage twice. The industrial levels all looked really cool and all had some cool backgrounds and elements to dodge like the targeting owls and such. The map screen was more interactive and free-roaming than it was in SDK #2. The story was a direct continuation from its ending in Super Donkey Kong 2. The map screen starts off on the cliff where Diddy, Dixie, and Donkey Kong were watching K. Rool sail away and became K. Roolenstein.