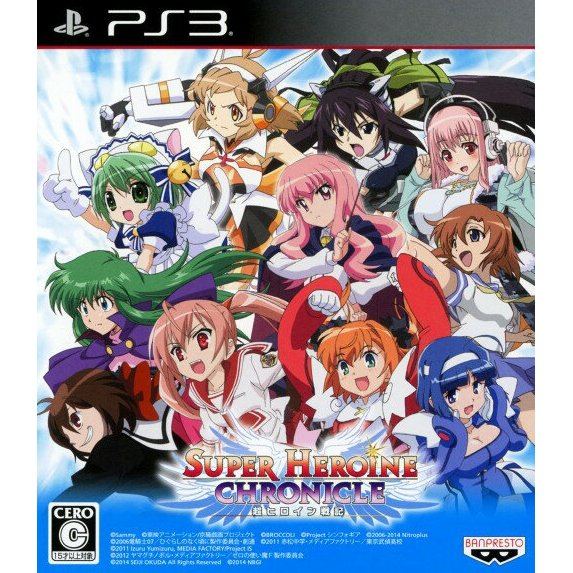 Super Heroine Chronicles is a mega crossover simulation RPG akin to games like Super Robot Wars series or the recent Project XZone; in this instance, heroines from various animes gather together from popular anime franchises like Symphogear,Kaitō Tenshi Twin Angel,Kyousogiga,Di Gi Charat, Super Sonico, Higurashi When They Cry, Dream Hunter Rem, Aria the Scarlett Ammo,Infinte Stratosand The Familiar of Zero. As well, there are 3 original characters making the total a roster of 26 playablecharacters.

Expect turn based strategy with gorgeous animated anime insets within battles all depicting the special qualities of each heroine and extremely crazy looking special attacks!

If you are familiar with Super Heroine Chronicle, why not let others know?

If you are a fan of Anime girl character and love the game system, buy this game now!!!

Maybe if the game sell well, we can have a sequel with even more Anime covered.
ndagroove (42) on 20, Mar. 2014 10:45 (HKT)
Super Robot Taisen meet Cute anime girls!! :)
If you like Super Robot Taisen and major anime Heroines, this game is for you! Game is really fun, and gets very challenging! Attacks are fully animated and some are hilarious as well as cute ! :3 Full Japanese knowledge not required to play, but definitely helps to understand parts of the game. Graphics are bright and colorful, so give it a go if you love all things "MOE"! ;)
francesco149 (1) on 12, Mar. 2014 16:28 (HKT)
A strategy RPG with a great gameplay. Also, cute girls doing cute things.
The gameplay is basically like disgaea with some extra mechanics except that you get to see 3d animated versions of the attacks (they're togglable by the way, so when you get bored of them you can disable them) and you also have a VN / Dating Sim part.
So it's basically a turn-based strategy RPG where you have to move your characters on a grid and plan out your attacks. Also you have this stat pie chart mechanic where using certain attacks on an enemy will lower its stat multipliers. If you correctly plan out your attacks, you can completely wipe out, for example, a monster's hit accuracy so that it won't hit you during the next turn. In between chapters you get to play "free stages" for grinding as much as you like and you also get a shop with some basic items such as potions and basic equips. During these intermissions you can also talk to a character of your choice to increase affinity with him/her and well, I haven't beaten the game yet, but I think this will determine which ending you will see.
Oh also, unlike disgaea, you get to manually distribute your characters' stats when they level up.
The art style is extremely cute, I love the original characters (Claude, Noel=Kazamatsuri, Meru=Ranshell, Eve=Valentine, Mii=Madobe, K-86X) and the non-original characters are off some of my favorite anime:
Zero no Tsukaima (Louise Françoise Le Blanc de La Vallière, Siesta, Tiffania Westwood), Hidan no Aria (Aria Holmes Kanzaki, Shirayuki Hotogi, Reki, Riko Mine, Jeanne D'arc), IS (Houki Shinonono Cecilia Alcott, Huang Lingyin, Charlotte Dunois, Laura Bodewig), Kyousougiga (Koto, Yase), Super Sonico (Super Sonico), Higurashi no Naku Koro ni (Mion and Shion Sonozaki, Satoko Houjou and Rika Furude Rena Ryugu), Senki Zesshou Symphogear (Tsubasa Kazanari, Hibiki Tachibana, Chris Yukine), Kaitou Tenshi Twin Angel (Haruka Minazuki, Aoi Kannazuki Kurumi Hazuki, Tesla Violet Nine Violet), Di Gi Charat (Dejiko Puchiko, Usada Hikaru), Dream Hunter Rem (Rem Ayanokoji).

The only complaints I have so far are:
- the game only runs at 720p on PS3, but that's normal for a game that was probabilly meant for PSVita.
- I haven't gotten very far into the game, but it seems like it doesn't have much of a challenge to it. It's kind of like Project X, where you really have to suck hard to actually fail a chapter.

But the excellent choice of characters and art style make up for these two cons so It's a full 5/5.

I highly recommend it if you like moe, anime and good Strategy RPG gameplay.
GX6000 (123) on 02, Mar. 2014 17:26 (HKT)
Sweet game!
This game uses the heroines from various animes and put them into an rpg/strategy play style. It also uses the same system as the popular super robot wars games where you command your units to attack, avoid, defend, or use sp to help your units. Must get for all anime fans or fans of this system!
1 »