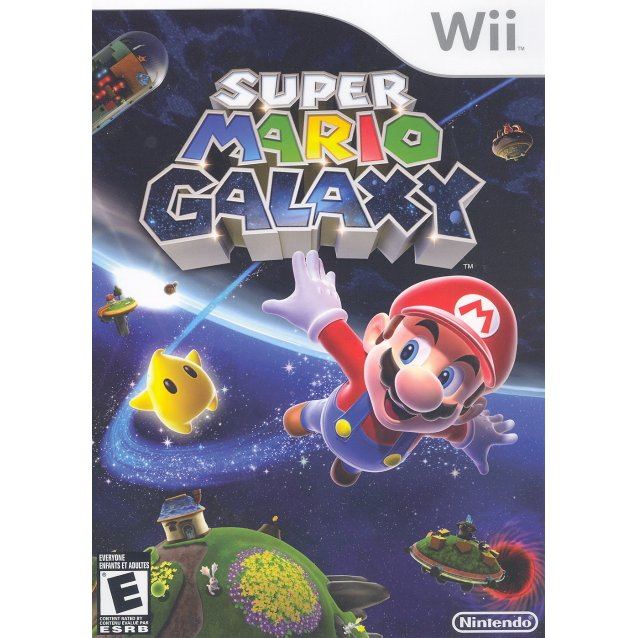 Best Mario Game in Years
An absolute must buy, the story eventually involves mario coming to Peaches castle for a reason that would be a spoiler, only to find bowser has himself a spaceship and is abducting the castle and peach AGAIN, knowing this mario comes to her aid, hanging for dear life onto the castle, only to be blasted into deep space, ...[read more...]

Become Mario™ as he traverses gravity-bending galaxies, traveling in and out of gravitational fields by blasting from planet to planet. Players experience dizzying perspective shifts as they run upside down through wild alien worlds that need to be seen to be believed. Whether you're surfing on a ray across an ocean in the clouds, rolling on a ball through a treacherous garden, or floating in a bubble over a poisonous swamp, there's no limit to the cosmic challenges you'll encounter!

If you are familiar with Super Mario Galaxy, why not let others know?

PROS: Every aspect of the game is well done, the controls, camera, and pacing. Your challenges goes from 2D parts to insane physics.

CONS: None. Maybe they should have tried to use more motion control, but that's being bitchy about it.
supershadow946 (1) on 03, Dec. 2010 07:23 (HKT)
The best buy for 2010
Hey! I would by this game to celebrate the 25th anniversary of the Mario Bros. Truly THE most epic game for the Wii and the Mario Bros. Series.
robson_1310 (1) on 11, Nov. 2010 03:43 (HKT)
Excellent game!
Undoubtedly one of the best Mario games for the Wii, visual and breathtaking graphics, fun, strategic, and caters for all ages.
Congratulations to play asia for the prompt delivery of product to Brazil, arrived all right.
1 »