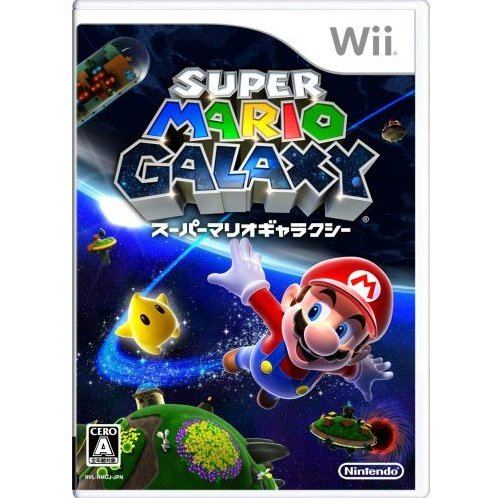 Become Mario™ as he traverses gravity-bending galaxies, traveling in and out of gravitational fields by blasting from planet to planet. Players experience dizzying perspective shifts as they run upside down through wild alien worlds that need to be seen to be believed. Whether you're surfing on a ray across an ocean in the clouds, rolling on a ball through a treacherous garden, or floating in a bubble over a poisonous swamp, there's no limit to the cosmic challenges you'll encounter!

If you are familiar with Super Mario Galaxy, why not let others know?

The game, the graphics, the music, the story, and all the characters are all fantastic!

I bought this after playing through Super Mario Galaxy 2 to play this a second time, but in Japanese. There appears to be no regional differences other than galaxy names. I actually like this game much better than Super Mario Galaxy 2 for many reasons. One, the game was new an completely original filled with imagination and creativity. Two, the stage selection is similar to Super Mario 64 by running around a large area to visit different stages where as in the second one, it is a lame stage select screen like New Super Mario Bros. Third, after many years, Mario finally has the ice suit which has always been my personal favorite.

You only need 64 stars to finish the game (I think), but there are several other stages and challenges afterwards with epic visuals, intense boss battles, and exciting worlds.

This game suffers from only 2 flaws. The first flaw is the camera. It commonly goes in places you don't want it to go, but you have no control over moving it to a desirable position sometimes. The second flaw is like with all Wii games, you are stuck with the lousy Wii remote which some people may actually like. I despise motion controls, but this game doesn't bother me too much with it. It would be so much better if you could just use the control stick or use a Gamecube controller.

PROS: Every aspect of the game is well done, the controls, camera, and pacing. Your challenges goes from 2D parts to insane physics.

CONS: None. Maybe they should have tried to use more motion control, but that's being bitchy about it.
[This review is based on another version of this product]
supershadow946 (1) on 03, Dec. 2010 07:23 (HKT)
The best buy for 2010
Hey! I would by this game to celebrate the 25th anniversary of the Mario Bros. Truly THE most epic game for the Wii and the Mario Bros. Series.
1 »