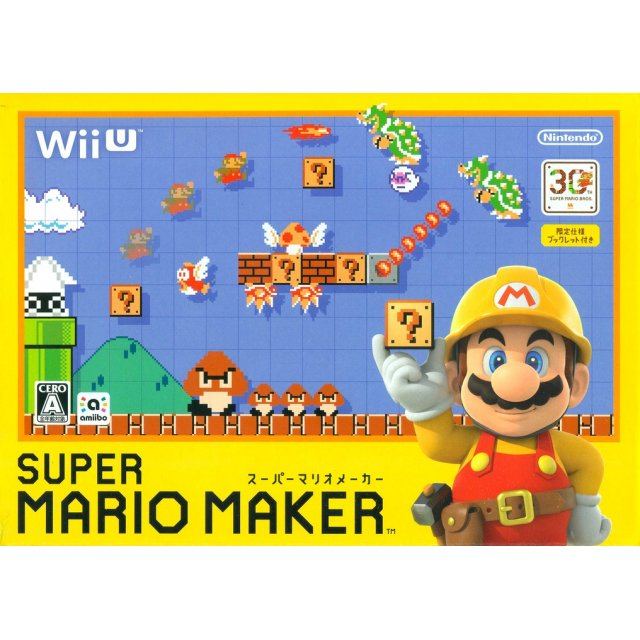 Nintendo
Compatible with Wii U™ (Wii U™)
For JPN/Asian systems only.

Brace yourselves for the brand new treat that Nintendo will offer to fans for theSuper Mario Bros' 30th Anniversary, theSuperMario Maker! For the first time ever in the Super Mario Bros. history, anyone can now create 2D Mario levels by just using their Wii U GamePad controller! Imagine yourself creating the most easy or hardest Mario course ever -- course filled with a new breed of goombas, a whole map full of coins or make the most impossibly fun Mario course ever made!

Super Mario Makerlets players use level editor where they can design, create, and play their very own Mario adventure, players can also edit their creation on the fly. Simply click and drag your desired element (blocks, pipes, lifts, and enemies) within the platform and let your imagination go to work! Choose among four different Super Mario Bro. game themes that suits your play style, including Super Mario Bros., Super Mario Bros. 3, Super Mario World, and New Super Mario Bros. Make your most ambitious and extravagant Mario stages inSuper Mario Makercome true and be proud to share your finished creations in the game’s online community for others players to play and enjoy.

Pokemon Cho Fushigi no Dungeon
US$ 70.99

If you are familiar with Super Mario Maker, why not let others know?

shadowstar123 (249) on 01, Oct. 2015 13:20 (HKT)
Best game on Wii U
This is what the Wii U was made for! Creating, designing and sharing your own levels! I have made a few Megaman stages, Angry Video Game Nerd stages, Donkey Kong Country stages and many of my own crazy stages. You can make them as easy or as hard as you like. Almost every object can be shaken including sound effects to create new or change objects that you can place. You can make your stages fairly long, plus, they are 2 TV screens tall and a second panel for underground sections. Your overworld section can be a normal stage while your underground section can be a moving level and with a different background.
If you have been playing Mario since NES, you have probably wanted to make your own stages, this is your dream come true. I highly recommend this game!