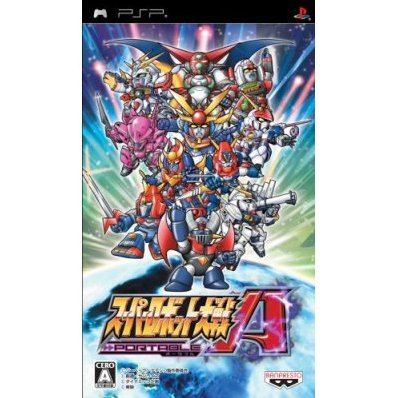 Banpresto
Rated
By Our Customers
Compatible with Sony PSP™ (PSP™)

Works on all systems sold worldwide, a correct regional account may be required for online features.
1w Expected stock arrival within 1 week.
US$89.99
Manufacturer
Banpresto
Rated By Our Customers
Compatible With Sony PSP™ (PSP™)
Version

Works on all systems sold worldwide, a correct regional account may be required for online features.
1w Expected stock arrival within 1 week
Price
US$89.99
Play-Asia.com Return & Refund Policy
Click on a thumbnail to see more pictures for Super Robot Taisen A Portable

Super Robot Taisen A was first released on Gameboy Advance in 2001. Now, 7 years later, it is re-released on Sony PSP with lots of upgrades and new features. The story takes place in a futuristic post war period where the Earth is slowly recovering from two devastating wars.However, just as people start believing that the peaceful times would last, because of a failed diplomatic mission, another war begins. To make matters worse, the failure of this mission made the Moon Empire lose confidence in the Earth Federation and thus declared independence from Earth as well as war.In this crucial hour, all departments within the Earth Federation are in standby mode, all except their 13th squadron. But like it or not, they are the only match for the mysterious enemies' forces.

If you are familiar with Super Robot Taisen A Portable, why not let others know?