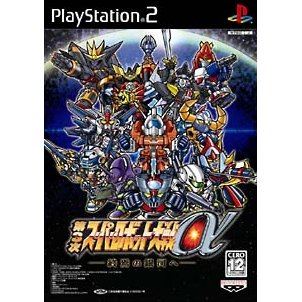 Super Robot Taisen Alpha 3: To the End of the Galaxy

NTSC
1w Expected stock arrival within 1 week
Price
US$84.99
Our previous price:
US$ 119.99
You save:
US$ 35.00( 29% )
Play-Asia.com Return & Refund Policy
Trustpilot
Trustpilot
Click on a thumbnail to see more pictures for Super Robot Taisen Alpha 3: To the End of the Galaxy

After more than 2 years, the successor to Banpresto's popular Super Robot Taisen Alpha Series is here. This time, with "Mobile Suite Gundam Seed", "Yuaha-oh Gaogaiga Final" and "Virtual On", another three major series join the foray, making this production the biggest one ever. Join the metal newcomers, overcome the boundaries of galaxies and destroy all evil on this world!As common for this series, this game uses a turn based chess-like game play. You are taking side of the righteous and exchange blows with the sworn enemies and all evil of the world in order to bring peace to the world again. All robots feature unique moves as seen in the original TV anime.Super Robot Taisen Alpha 3 includes 32 robot productions. Apart from the new additions, such popular series as "Mobile Suit Gundam", "Mobile Suit Gundam ZZ", "Neon Genesis Evangelion", "Super Dimension Fortress Macross", "Yusha Raiden", "Legendary Giant God Ideon", "Super Bestial Machine God Dancougar" and many more are included.Apart from standard one-on-one duels, you can organize your robots into 4-robot teams fighting together as a unit. New this time is an "automatic team formation system", where one can use "balance", "power" and "speed" for the computer to determine how to setup the team. If your team has built up excess credits, you can also use more detailed guidelines such as "mobility", "attack strength", "defence strength", "special ability", "special skill", and "will command" to field the remaining robots.シリーズ史上最多の作品参戦！さらばスーパーロボット対戦α！究極に進化した戦闘アニメーション、原作を忠実に再現した数々のシステム、そして壮大なスケールで展開するストーリー。「スーパーロボット大戦α」の流れを受け継ぐ、αシリーズ完結編！！

If you are familiar with Super Robot Taisen Alpha 3: To the End of the Galaxy, why not let others know?

You are a play time, this game is fore you!!!

big series SRT. this point is your..
-Love anime
-A japan game is not probblem...
-Your love a mecha series
-Tima play
-Love tactical

also a game for you.
Don't miss is a game for special fan...
Anonymous on 24, May. 2006 20:46 (HKT)
I don\'t think the series can get any better than this
All the systems have been drastically improved...you can now fast forward battle scenes, which is a very nice touch.
The weaker mechs can now gain high levels via the platoon systems...The classic strong robots are being weakened in this installment, while other strong new robots are taking the roles of those classic robots.(Gaogaiga, for example, is insanely strong.)

Grab the reduced price version when it comes out...you will not regret! I guarantee!
jonlhill@gmail.com (3) on 13, Dec. 2005 06:30 (HKT)
An SRW Work of Art Personified!
If you are a fan of the \"mecha\" genre, then you don\'t want to miss this one! Get either the Special Edition boxset containing SRW Alpha, SRW Alpha Gaiden and SRW Alpha 2, or each separately and this one to truly appreciate the way a strategy game with giant robots should be made! ^^
Gustavo on 30, Oct. 2005 01:11 (HKT)
(spanish) EL MEJOR JUEGO DE SUPER ROBOT WARS!!
(SPANISH) LO MEJOR. SI TE GUSTA EVANGELION, MAZINGER Z, GUNDAM, MACROSS, Y DEMAS ROBOTS JAPONESES, NO DEJES PASAR ESTE TITULO. LO MEJOR!!!
gustavo on 31, Aug. 2005 00:08 (HKT)
the best
is teh BEST game ever., no minues, mno more. the best.
srw fanatic! ^^
1 »