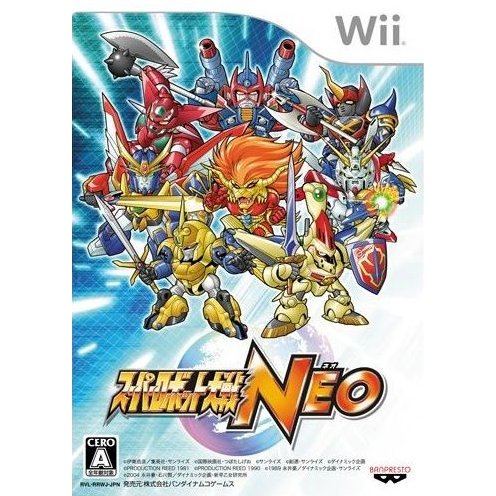 Banpresto
Rated
By Our Customers
Compatible with Nintendo™ Wii (Wii™)
For JPN/Asian systems only.

sold Out of print / Out of stock.
Manufacturer
Banpresto
Rated By Our Customers
Compatible With Nintendo™ Wii (Wii™)
Version

Super Robot Taisen is another one of Bandai Namco's hit series. After participating in the Gundam Seed wars from the last installment, it's time to launch into the battles for energy. As one of the most comprehensive cross-overs, mecha from all famous series and their pilots are joining in.The mecha have soiled plans of numerous villains, yet more are popping up. Following Dr. Hell's destructive footsteps is the Mikene empire and devil Gundam. Strives never end unless the mecha combine their forces. Come participate in the war effort.

If you are familiar with Super Robot Taisen NEO, why not let others know?

ant_sindoni (27) on 11, May. 2013 04:48 (HKT)
Don't miss this one!
Another great game in the SRW series, this time fully in 3D and introducing a lot of "strange" robot series completely new to SRW.
If you are a SRW fan, you should not miss this one.
cloudy.yin (4) on 09, Sep. 2011 09:54 (HKT)
super robot taisen neo
very good game with the good series of super robot wars.
all the fan for super robot wars must have this game.
i recommended buy this game.
Banjo (13) on 18, Jan. 2011 19:52 (HKT)
amazing game
the system here is very amusing, not like any other srw, its all 3D, you will climb and go around buildings etc, the game is more challenging than most new srws, its only 40 something stage but many stages are much bigger than a normal srw stage, so its like 60+ stages long :D , the replay value is not much though
timey84 (133) on 22, Sep. 2010 19:37 (HKT)
Eldran series FTW.
For once Banpresto had made a better 3D SRW SRPG game. Everything were fine and smooth gameplay esp. Though the 3D look quite a bit plain, but still a goodjob done. Eldran series was the main objective i wanted to play this game. All the Eldran series appeared in game. Even Daiteioh without a full anime appeared! Which I had nothing to complain about.
uredream (179) on 24, Mar. 2010 10:07 (HKT)
If you dig for Robot game, this is it.
SRW NEO lead you to next level of SRW Fanboys with
greater battle scenes, strategic intentions, and scenario.

Wii-ers will regret to miss this one.
1 »