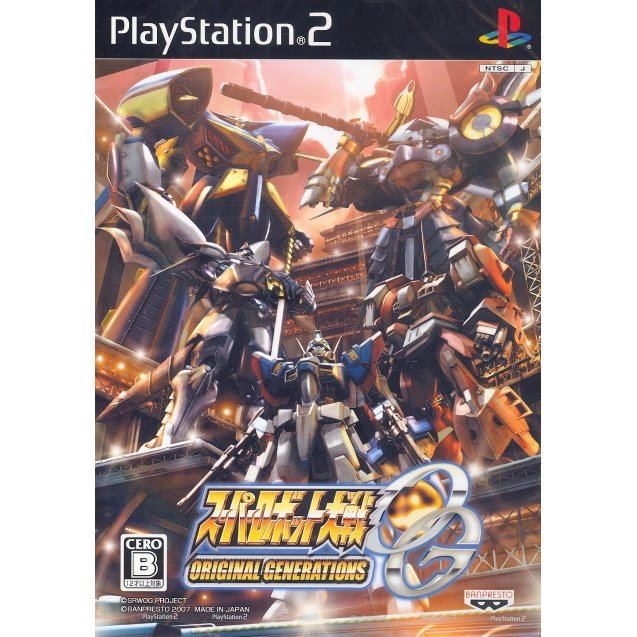 Super Robot Taisen OG: Original Generations is a tactical RPG game and a remake of the two Original Generation games for the Game Boy Advance™. The game is intended to celebrate the Super Robot Taisen series' 15th anniversary.Original Generations has been developed by the team that produced Super Robot Taisen MX, and uses high-energy, dynamic action for the in-game battle sequences.The game features a new combat system called the "Twin Battle System", which allows two adjacent units to combine into one squad, similar to Super Robot Taisen Alpha 2 and Alpha 3's squad system. The Twin Battle System allows both robots to attack simultaneously, and either focus their fire on a single target (with a damage penalty for one of the robots) or, when facing another squad, each target a different one of its members.Squads can also support-attack with other squads, allowing up to four attacks in a single action. As in the PS2 Alpha games, a single unit can also use an ALL attack to strike both members of an enemy squad at once. The game also features "ALLW Attacks," similar to the "Double Attacks" in MX, which can strike both members of a target squad and a single unit (or squad) directly next to it.Original Generations has the largest amount of pilot cut-ins in the franchise's history, along with individual, unique animations for certain pilots when using equipable weapons (i.e. Brooklyn Luckfield with the Shishio Blade).戦闘シーンは全て新作！昨年の「第3次スーパーロボット大戦α」をも上回る派手な演出が圧巻！また、新たなキャラクターやメカも登場し、GBA版の「OG」と「OG2」の間のシナリオや、「OG2」以降のシナリオも追加されるなど、まさにOGシリーズの集大成！もちろん、OGシリーズのストーリーを最初からプレイできるので、未体験者でも楽しむことが出来る！

If you are familiar with Super Robot Taisen OG: Original Generations, why not let others know?

[This review is based on another version of this product]
legendia21 (11) on 30, Dec. 2011 07:26 (HKT)
Get this game or you will be sorry SRW fans
This is THE game that takes all the broken originals from all the SRW games you know and love to make a masterpiece that should stay in your PS2 at all times.

Great graphics, over the top battle animations and memorable characters with great music and mechs make this game one of the greatest from the series.

Great gba games were made into absolute masterpieces with this remake, there is no doubt about. The animation in the battles is just breathtaking compared to the gba games.

All your favorites from the Compact and Alpha series are here, plus some newly added SRW R units exclusive to the remake.
1 »