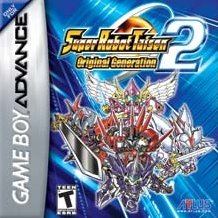 Works on all systems sold worldwide, a correct regional account may be required for online features.
1-2w Expected stock arrival within 1-2 weeks.
US$146.99
Lunar New Year Sale
Limited time offer - Secure yours now before the offer expires!
Our previous price:US$ 147.99
You save: US$ 1.00( 1% )
Manufacturer
Atlus
Compatible With Game Boy Advance™ (GBA™)
Version

Works on all systems sold worldwide, a correct regional account may be required for online features.
1-2w Expected stock arrival within 1-2 weeks
Price
US$146.99
Lunar New Year SaleLimited time offer - Secure yours now before the offer expires!
Our previous price:
US$ 147.99
You save:
US$ 1.00( 1% )
Play-Asia.com Return & Refund Policy
Trustpilot
Trustpilot

The year is 187 S.E. It's been six months since the DC War against the Divine Crusaders and the L5 Campaign against the aliens known as the Aerogaters...In the aftermath, the Earth Federation Army (EFA) was forced to restructure due to the severe casualties it suffered, even among its leaders. Brian Midcrid, once President of the United Colonies, was elected as the new Earth Federation President.Previously, he had disclosed information on the L5 Conflict to the Federal Assembly. This disclosure, later called "The Tokyo Manifest," revealed the existence of extraterrestrials who posed a threat to the survival of mankind.Since then, President Midcrid has announced the Aegis Project, a plan to rebuild and rearm the EFA. He's asked for solidarity among all the inhabitants of Earth. In the name of the project, he began to fortify the planet by developing new humanoid mechs and mass-producing them.However, trouble lurks in the shadows...Remnants of the Divine Crusaders, a group once led by Dr. Bian Zoldark, along with individuals in the Federal government and the EFA, are scheming to establish a military state...And the forces working in the shadows, as well as the mysterious entities called "Einsts," will plunge the human race into even greater depths of chaos...

If you are familiar with Super Robot Taisen: Original Generation 2, why not let others know?

ZikZak (25) on 31, Jul. 2007 02:46 (HKT)
Excellent !
Very good game.
A little hard but very exciting with incredible animations.
A must have for all fan of strategic game and mechas.
PuNiao (365) on 28, Apr. 2007 11:12 (HKT)
Super Robot Taisen: Original Generation 2
Only a few months ago, Atlus released the first Super Robot Wars (SRW) - the first English translated version of the game and it was an instant hit. Now, the second has been translated and released, and comes equally well. Picking up where the first title left off, players will find themselves being thrown back into a war to save the Earth against aliens, grappling with internal conflict and more. Its branching storyline means gamers will need to play through several times to understand the plot fully. So if things do not make sense the first time around, do not despair.

The game has improved graphically, with little touches such as robot \"mechs\" moving during battle sequences. There is also a plethora of secrets, combination attacks and more, making the more than 50 hours of gameplay easily worth the money spent. Its main failing: presentation. Unlike the first title, SRW 2 has a cuttered menu which looks even older because of its green, grid-like menu. Units are also often over-powered, and the developers chose the easy way out of making enemy foot soldiers that much stronger because of it.

Fans of Japanese mecha (giant robots in anime) will want to pick up this title, though. With few such mecha being translated into English, this title stands out as one of the top few that fans of the genre should try.