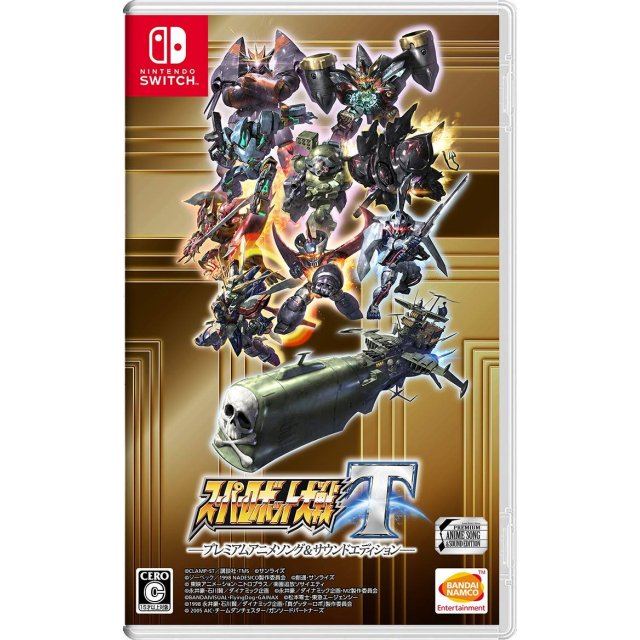 Note: Price is subject to change without prior notice.

Nelke & the Legendary Alchemists: Ateliers of the New World
US$ 27.99

If you are familiar with Super Robot Taisen T [Premium Anime Song & Sound Edition], why not let others know?

[This review is based on another version of this product]
jj00001 (36) on 16, Jul. 2019 18:52 (HKT)
From, My friend
Not change much from the previous, I'm always playing every series. Great!!
[This review is based on another version of this product]
mukaidasam (1) on 06, Jun. 2019 09:29 (HKT)
Mecha Heaven
On its own, Super Robot Wars T is an extremely solid game, and perfectly showcases just what makes this series so amazing. If you've never played a Super Robot Wars game before, you're in for a treat. All these different series are woven together into one single, coherent plot, where all the different characters interact and play off each other. I've never watched most of the series in this game before I played (Even Cowboy Bebop!), but Super Robot Wars makes an excellent introduction to all these series and mecha as a whole. You can actually read information about the series in-game, in the middle of cutscenes, so you'll never be blindsided by new characters or terms. While gameplay may be simple, it's a difficult challenge to earn all the bonuses within each stage, and every single unit gets its own battle theme and unique, over-the-top attack animations. Super Robot Wars is an amazing tribute to mecha, and Super Robot Wars T, while not as groundbreaking as the Alpha or Z sagas, is still a great game in its own right, and probably the best of the international games so far.

Keep in mind there's a few small differences between the Switch and PS4 versions. I prefer the Switch version because it's portable, and I can't use my PS4 anymore, but you can actually upload and customize your music with any song you want in the PS4 version, but not the Switch version. Also, I've heard that the eShop DLC is difficult to access in the Asian-English version for some reason.
Ahmed Sameer (75) on 22, Apr. 2019 23:59 (HKT)
PROBABLY THE BEST OF THE TRILOGY
When this game was announced at the end of 2018, wasn’t excited for it but G Gundam kept my hype a bit high, then Shin Getter Dragon from Getter Robo Daikessen was reveled then my hype went sky high,
This game generally the same as V & X, in fact it is a lot easier, the sub order option is available from the very early stages and all pilots can participate in it, there is also a special order which is available at certain point throughout the game, the pilots skills tree is no longer there meaning that all skills are unlocked as long as the player have the TacPoints to buy them.
Animations are still good, this is the first time a game gets release on a Nintendo & a Sony platform as the same time, and the first game on a Nintendo platform to the get the glorious 2D animations.