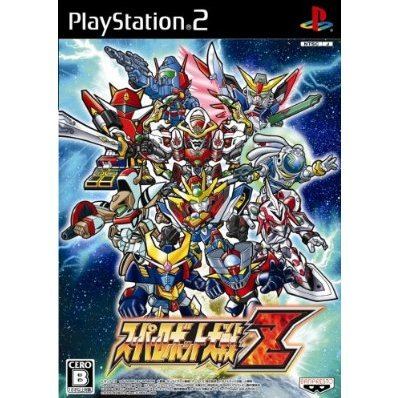 If you are familiar with Super Robot Taisen Z, why not let others know?

[This review is based on another version of this product]
tem_1221 (6) on 16, May. 2013 16:11 (HKT)
Great Great title.
Been a huge fan of super robot taisen ever since the playstation days, started from srw Neo, and this one just takes the cake, one of the all time best specially in the ps2. (Bought a japanese ps2 just to play this game)
[This review is based on another version of this product]
Ahmed Sameer (75) on 10, Nov. 2011 18:06 (HKT)
It Has Almost Everything.
Super Robot Taisen Z the last game to come out on the PS2, it's the game that sits near perfection, the animation are superb now we can see units attack in up to 4 deferent directions, the animation changes as will, the soundtracks are awesome, the game system is easy & simple, the cast is a favorite a combination of classic super robots and modern ones with a unique line of real robots, no matter how awesome this game is, it has some draw back, first it uses the same old map that rotates 90 degrees only and zooms in and out and the units icons are in 2D and second are the original units, they don't receive a major upgrade like in the previous games, only a new attack or two, however this game is still a must buy.
[This review is based on another version of this product]
cody0999999 (9) on 25, Aug. 2010 06:04 (HKT)
Simply Epic
One of the best mrcha games I've played in a long time. Much better than any mecha game you can get in the states anymore. You may have some trouble getting started but you get used to the menus pretty fast.
[This review is based on another version of this product]
nightblade47 (3) on 25, Mar. 2010 10:26 (HKT)
Another great title
This is the newest PS2 SRW to come out, and I played Alpha 3 to try to understand the team mechanics. I found that I really didn't need too. This game is pretty straightforward with a fair learning curve. The visuals are great too, with battles being just as fun to look at as to play. If you've never played a console SRW before, or are just getting into the franchise, this is a great place to start.
[This review is based on another version of this product]
thecrimsonblade (4) on 23, Mar. 2010 12:01 (HKT)
Ridiculous
Out of all the super robot wars on ps2, this one takes advantage of the animations and visuals. We can finally see the units attacks go from the air to ground and they even have different animations based on where the enemies stand. The platoon system makes a good number of the low tier units useful so that they can add power to your main units. I recommend the game to any fans of super robot wars.
1 »