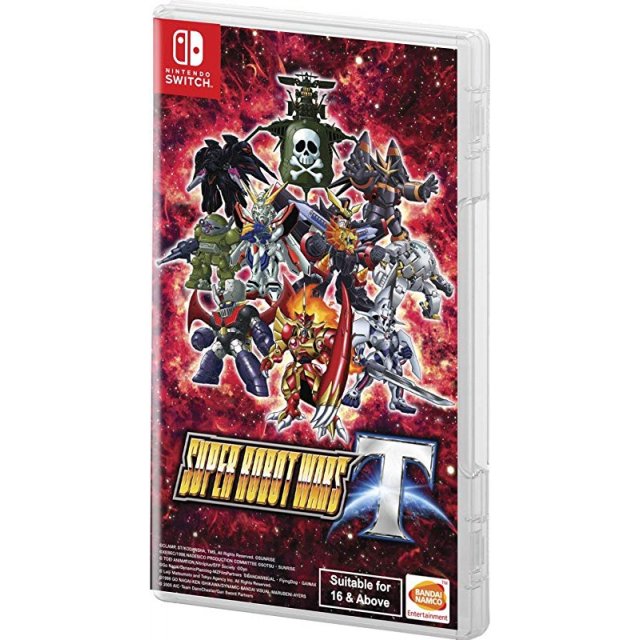 Works on all systems sold worldwide, a correct regional account may be required for online features.
24h In stock, usually ships within 24hrs.
US$66.99
Our previous price:US$ 69.99
You save: US$ 3.00( 4% )
Bandai Namco Games
Rated By Our Customers
24h In stock, usually ships within 24hrs
Price
US$66.99
Our previous price:
US$ 69.99
You save:
US$ 3.00( 4% )
Play-Asia.com Return & Refund Policy
Click on a thumbnail to see more pictures for Super Robot Wars T (Multi-Language)[English Cover]

If you are familiar with Super Robot Wars T (Multi-Language)[English Cover], why not let others know?

noght (16) on 17, Sep. 2020 17:21 (HKT)
Rayearth is there for you!
I am a HUGE fan of Magic Knights Rayearth, and I bought this entry in the series mostly because of the Rayearth's presence. I was surprised by all of the fun I had with this game. Story is nice and fun, fan service is amazing and the characters there are super nice to play!
[This review is based on another version of this product]
cantioco (1) on 15, Aug. 2020 05:09 (HKT)
Great Game
The game is everything you expect it to be! I have 0 complains. It took a while to get to the states, 63 days to be exact and it did kinda get lost but USPS was able to find my item and get it to me.

Final Words: The game is great and worth every penny.
Carrier Service: My Item went into some kind of Loop and was going back and forth between two locations but I contacted USPS and they were able to sort it out.
Time to Arrive: If you don't mind the wait then go for it, or you can just pay a little extra and get the super fast delivery.
thedemonpants (1) on 17, Mar. 2020 08:24 (HKT)
Phenomenal Game!
Expected this to take months to get, but it arrived in two weeks! I'm absolutely loving the game! The English translation is very well done, most people wouldn't even know that it came from China. The game is a little too easy, even on hard, but I'm still having a ton of fun and I would recommend this to anyone who likes the series in this game!
kunaru52 (1) on 08, Mar. 2020 11:11 (HKT)
I finally have it
I loved this game very much and thanks to Playasia I could get it in physical format, the game is entertaining, it brings my favorite characters, a purchase that I do not regret.
kristall.exe (1) on 27, Dec. 2019 13:38 (HKT)
Super Robot T(errific)
It works flawlessly with a crisp resolution even when played portable. Its multiply difficulties make it perfect for both neophytes and veterans of the series (although some SR points requirements are a bit tricky, especially when compared to other games of the series). Probably the best of the three main entries being released in English so far (V being a close second)... also, it has Gaogaigar and Rayearth, which is ten extra points for me, because I love those two shows!
1 »