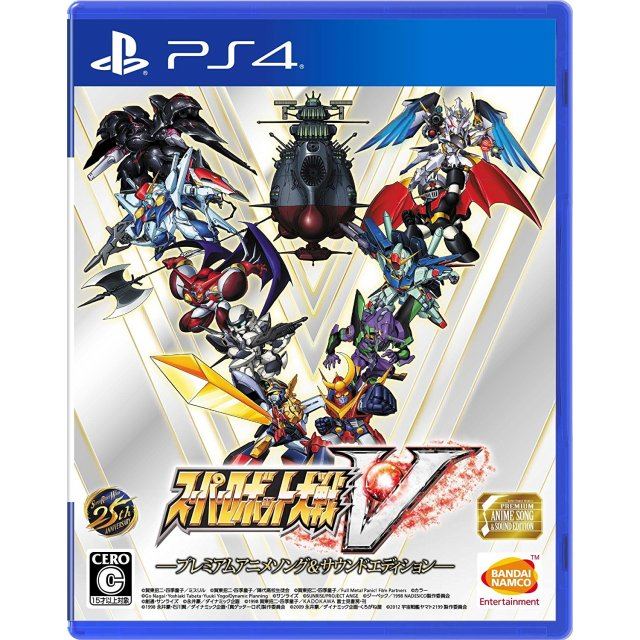 Also, Super Robot Taisen V is set to include a giant list participating works -- including many which are new to the Super Robot Wars series.

If you are familiar with Super Robot Wars V [Premium Anime Song & Sound Edition], why not let others know?

[This review is based on another version of this product]
kronos33 (2) on 12, Nov. 2019 20:53 (HKT)
Solid Super Robot Wars Entry
i am new to the super robot series but i have to admit i do enjoy the 2 i have. i am very anxiously awaiting the 3rd entry to come out. while i am not familiar with most of of the series such a gundam i am very familiar with one i grew up with in the ear to mid 1980s tranZor Z or as he is known in japan mazinger Z. this originally is why i bought my first copy since i do not own the super famicom mazinzer game. i have to admit i enjoy these 2 games so far. i am normally not into rpg style games but i have a great fondness of these so far. the anime cut scenes are a nice touch. i am now starting a mech genre for my switch game collection. the new gundam game will be next on my list as will the few others. if anyone is famiiar with gundam and mazinger z. i recommend these games to anyone
[This review is based on another version of this product]
Lunari (7) on 25, Oct. 2019 13:42 (HKT)
Solid Super Robot Entry
If you like the series, this is more of the same. The story starts strong, but then goes off on a pretty lame tangent for a bit. The core gameplay remains the same, which is good. The mechs cannot be improved to the level they are in T, but it's not a huge detraction.
[This review is based on another version of this product]
atwoface (1) on 25, Oct. 2019 09:10 (HKT)
Super Robot Wars V
The gameis excellent the switch version is a perfect port of the ps4 version which i have already it great to take the gam portable to play anywhere. I especial like this edition because of the crossing over of Starblazer 2199 Gundam seed destiny and Gundam 00 and unicorn with the mazinger Z and also the Fullmertal panic being part and still having the humor of full metal in the story. I would recommend this game to anyone who is a fan anime mecha series such as gundam or fullmetal panic. But to me the best part of this edition in my personal favorite Starblazer 2199.
[This review is based on another version of this product]
SFukuda (1) on 18, Mar. 2017 08:36 (HKT)
Solid Entry in the SRW Family
Fantastic game; a good game worthy of coming out under the SRW 25th anniversary flag.