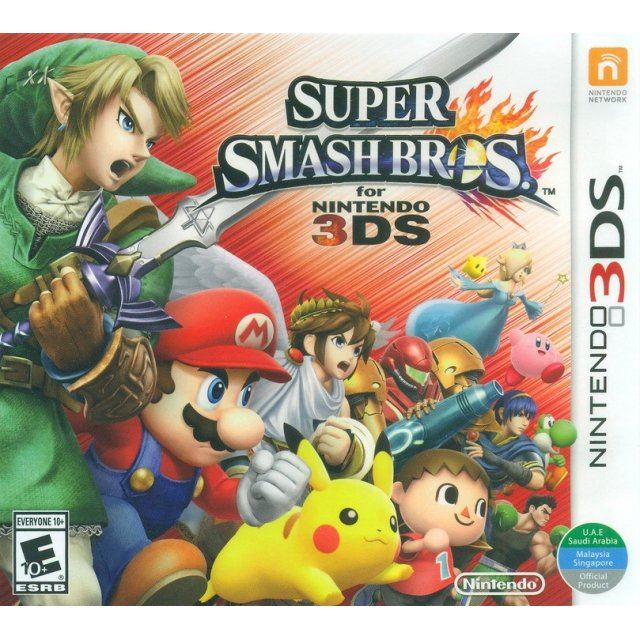 NTSC
24h In stock, usually ships within 24hrs. (Only 1 left in stock.)
US$39.99
Limited time offer - Secure yours now before the offer expires!

Manufacturer
Nintendo
Rated By Our Customers
24h In stock, usually ships within 24hrs
(Only 1 left in stock.)
Price
US$39.99
Our previous price:
US$ 45.99
You save:
US$ 6.00( 13% )
Play-Asia.com Return & Refund Policy
Trustpilot
Trustpilot
Click on a thumbnail to see more pictures for Super Smash Bros. for Nintendo 3DS

Newest Nintendo Fighting Game
Nintendo game characters return again in the most famous of crossovers in this new competitive fighting game! Super Smash Bros. for Nintendo 3DS is the fourth installment and the first portable game in the franchise.

Gameplay, Levels, Stages, and Other Features
Same with other games on this series, this game will have up to four players fighting against each other. Pressure opponents with a variety of simple yet complex attacks and win the battle by smashing them out of the arenas. SSB enthusiasts will be delighted as some elements of previous games come back. Players can send their fighter as customized from different version; customized attack directions are also featured in this game. Levels of battles will be in between Super Smash Bros. Melee and Super Smash Bros. Brawl. Touch screen controls are removed for this edition.

Nintendo Characters Fighting Each Other
Choose the best Nintendo character and win over the opponents. Most of the characters from previous installments returned and ready to attack each other. Classic characters such Mario and Donkey Kong and new heroes such as the Animal Crossing Villager, Wii Fit Trainer and Mega Man are mixed in this game. This 3DS version will feature stages based on released handheld system games. Let the battle begin…!

If you are familiar with Super Smash Bros. for Nintendo 3DS, why not let others know?

you can't find a jet-powered banhammer outside smash bros. go get 3ds/wii u
rrof92 (8) on 18, Feb. 2015 18:49 (HKT)
Smash on the go!
The 3DS fits perfect into the smash universe! the whole Idea of separating the games and basing each version on the home consoles/ Portables just give every version a fresh feeling!