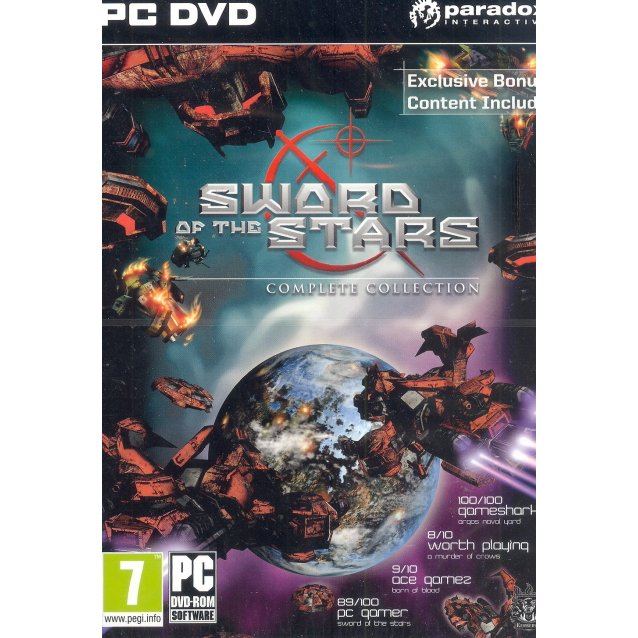 The Sword of the Stars story...

Episode I: Sword of the Stars
It is the year 2405, and human scientists have discovered a new technology, the Node Drive. This is an innovation that will finally allow travel from star to star at speeds faster than light. As mankind is poised on the brink of a new era, tragedy strikes, as the first inter-colony ship is destroyed and Earth is ravaged by an alien force. What was supposed to be the dawning of a new era instead was stymied by a grim, new reality... We are not alone...and we are no longer safe.

Episode II: Born of Blood
The year is 2445. Over 30 years have passed since the first stellar empires began to expand. Four races once set out to explore and conquer the galaxy, meeting in fiery clashes that spanned the universe. The first wars have passed and a promising age of diplomacy dawns.

Now a new alien race emerges shattering the uneasy peace. With new drive systems, ships, technology, and tactics, the Zuul burst onto the scene with a devastating agenda – not only will they conquer, they will control the entire universe… unless you put a stop to their destruction.

With savage ships and psychic powers, they enslave or annihilate all those who oppose them. As their galley disks descend to harvest slaves from neighboring races, all other empires may be forced to put aside their grudges – if they do not unite against the Zuul, each race will be systematically exterminated. Form alliances and learn to work with your foes as you lead your fleets to victory in a universe at war in Sword of Stars: Born of Blood.

Episode III: A Murder of Crows

While the four civilized races battle back the voracious Zuul and seek advantage over each other, a ghost from the past returns to the galaxy in the form of the manipulative Morrigi. Already known for their dark crow-shaped attack drones and deadly traps, this race once thought long extinct, returns looking for vengeance.

Using never-before-seen weapons, ships and tactics, the Morrigi fall upon the other five races of the Sword of the Stars universe, who must now adapt to the ancient masters of space or be destroyed.

Time is of the essence as world after world falls to the black winged ships that surge out of the dark like A Murder of Crows.

If you are familiar with Sword of the Stars Complete Collection (DVD-ROM), why not let others know?