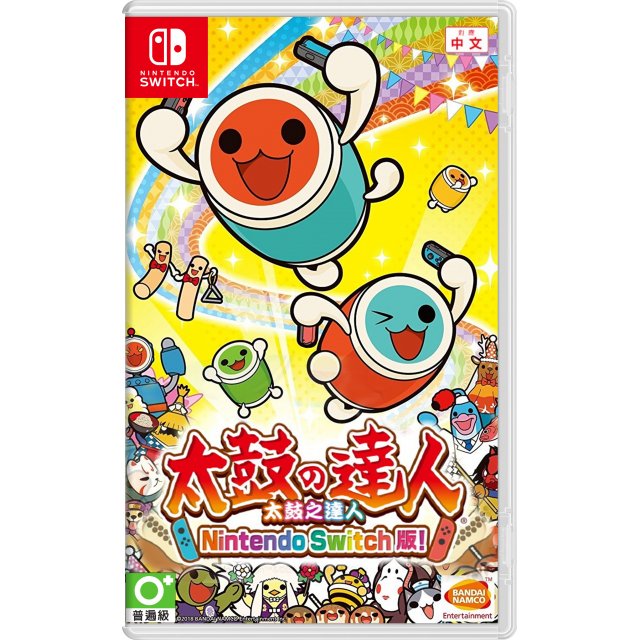 Works on all systems sold worldwide, a correct regional account may be required for online features.
24h In stock, usually ships within 24hrs.
US$44.99
Our previous price:US$ 46.99
You save: US$ 2.00( 4% )
Bandai Namco Games
Rated By Our Customers
24h In stock, usually ships within 24hrs
Price
US$44.99
Our previous price:
US$ 46.99
You save:
US$ 2.00( 4% )
Play-Asia.com Return & Refund Policy
Click on a thumbnail to see more pictures for Taiko no Tatsujin: Nintendo Switch Version! (Multi-Language)

If you are familiar with Taiko no Tatsujin: Nintendo Switch Version! (Multi-Language), why not let others know?

y_nik1 (2) on 05, Mar. 2020 23:39 (HKT)
My two weeks in a row evening habit
Awesome game. Your mistakes doesn't make music awful, like in guitar hero, but you just play with a song. Got a mistake buying dlc in european EShop, so be careful about them. Also online ranking is pretty alive, got no problems finding an opponent(on easy and normal difficulties, don't think hard and extreme lack of them, will check it soon).

Must buy if you enjoy rhythm games, and mostly great songs.
thatgregneedham (3) on 14, Feb. 2020 14:17 (HKT)
Let's get physical
Always try to get physical copies of games. What's interesting is when first playing there is an update that immediately changes it all to English which was unique for an import game as my other import games require manual langue changes.

Great game
[This review is based on another version of this product]
8BIT Scorpion (1) on 25, Sep. 2019 06:27 (HKT)
Awesome Game
Great game, I don't have the drums but I'm happy with the motion controls (though they're a bit unreliable on hard) Try the demo on the eShop, see if you like it!
Imation (464) on 16, May. 2019 00:48 (HKT)
Incredible
Yes!, very funny to play with family or friends, the portable version is solid indeed but is better in TV screen (to play with more people) many exclusives tunes of Nintendo included here
[This review is based on another version of this product]
Firminus (1) on 28, Mar. 2019 04:15 (HKT)
Fantastic Game!
I love this game, it’s the first of the series I have got to play. I have always seen it, but never got to own one. So much fun. Also super glad to have the Japanese version (it has English as a language option), because of all the amazing DLC that is only for Japan!
1 »