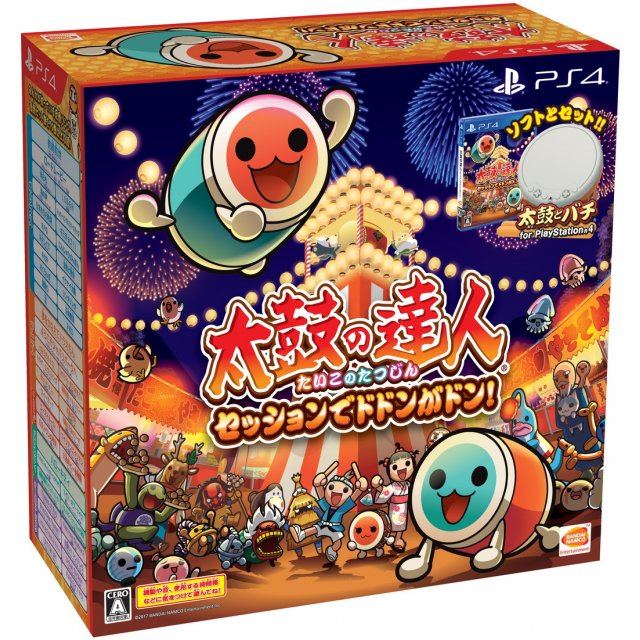 Taiko No Tatsujin is finally here for the PlayStation®4 platform!

◆Well-known mainstream songs with more than 70latest hits! You can now enjoy that all so familiar game center experience playing Taiko No Tatsujin at the comfort of your home!

◆All essential gaming elements are catered for in the PS4™ Taiko No Tatsujin! Simply register your friend or family member's Sony Entertainment Network account as a friend allows you to have a causal game session with their Ghost data even if they are not around!

And for those with great ambition, the Taiko Ranked Match provides you the opportunity to put your skills to the test and compete against online players from all around the world! You will be matched up automatically against other online Ghost data befitting of your current skill level.

If you are familiar with Taiko no Tatsujin Session de Dodon ga Don! [Taiko Controller Bundle Set], why not let others know?

melveny (1) on 06, Apr. 2018 02:59 (HKT)
Game is good, but controller is only OK
In general I like this PS4 version, but Hori drum controller in box was working really bad when I first time tried it. After disassembling it, checking all connectors inside and assembling it back, controller started to work way better. Bundle seems useless, game is more fun with Dualshock 4 controller, ok.
steph.chalot (1) on 07, Feb. 2018 02:42 (HKT)
Good game
A very good rhythm game, that will keep you playing for hours if you like this kind of game.
However, I have mixed feelings about the tatacon (drum), which is not sensitive enough at first. If you want to play on the highest difficulty (extreme), it's almost impossible to win since you have to put much strength for every hit on the tatacon. That is, unless you actually modify the tatacon, which I did, and it went flawlessly after that.

Thus, I highly recommend this game, if you are ready to make some modifications to the tatacon. Otherwise, the experience may be quite frustrating.
TETSU_SENPAI (9) on 10, Jan. 2018 07:06 (HKT)
A fantastic addition to any rhythm game enthusiast collection!
Simply put, this game is exhilarating to play on a drum controller and has a nice mix of music across its categories and has a worthwhile DLC campaign (if the 70 on disc songs are not enough for you).

The drum controller feels responsive and resilient so I find no issues using the amount of force one would expect when playing on this type of instrument. Also the native controller buttons being accessible from the drum for easy menu navigation is a nice touch and well appreciated.

One things I will say about the drum is that although it's rubber feet minimize sliding while playing on it, I found during more intense songs at higher difficulties that the vibrations of the drum patterns will move the drum and additional reinforcement such as heavy books to keep it stationary was needed.

The visuals of this game are bright and festive, all of which are rendered in full HD with high audio fidelity to match. A must buy for series fans and highly recommended for rhythm game enthusiasts!
joshrules (2) on 06, Dec. 2017 07:03 (HKT)
Really good, but not the best in the series.
Overall very good game. If you know what it is then you probably know what you're getting into.

It worked flawlessly on an Australian ps4. If you want the DLC bonus you need a JP psn account, which is very easy to do. All the in-game text is in English with some Japanese voice overs, so you don't need any Japanese language skills to play this.

The taiko controller is great. The build quality is pretty good, it comes with a braced stand. It is plastic, so don't be too rough. You can adjust the hit detection by moving hits either forward or backward on the timeline. If you have a smart TV this is helpful to compensate for input delay. A few commenters said that the controller is not sensitive enough, but I've not experienced that. You don't really need to hit it that hard. Getting the rim shots right is a little harder, as they need to be placed more accurately. This is fine though, as it's simply part of the challenge of the game. If you've ever studied drum kit, your sticking practice will come in handy here. LRLRLLRRLLRR and so on :D

The biggest drawback is the progression. There is no single player story mode, which is one of my favourite features of other games in this style. It's not a dealbreaker as the game is very fun, but some kind of more obvious progression route would have been nice.

There are challenges vs. CPU, where you can throw down vs. the likes of Heihachi and Hello Kitty. They are fun and give extra rewards.

Other than that, you earn DONs (gems) to buy Treasure Chests (not loot boxes, guys, seriously) which give random cosmetic rewards and titles. I don't mind this as it is purely cosmetic and doesn't affect gameplay at all.

So a great game overall. I had to take off one star for the lack of a story mode, but this game is still a hit. Strongly recommended.
lukester64 (3) on 24, Nov. 2017 08:41 (HKT)
ENGLISH MENUS!
The game auto detects that you are playing on an English console so most of the menus are in English with the exception of the songs. But since the songs play when you are on the song selection screen so it isn't so bad. You'll probably remember your favorite title's Kanji after playing for a while!
My friend and I got both the game and Taiko. I got this very bundle while he bought the taiko separate and the bought the game digitally. His taiko's "blue hits" aren't as sensitive as mines so he is currently making some modifications he found he could do to his drum.
If you are playing this game without the drum, you are doing it wrong! It just isn't the same when playing on the pad. Also having 2 drums for 2 players makes this game so much fun. I'm glad I have a friend who has another drum because then it becomes a spectator sport. Watching one person do it is kinda boring.

Installing size using the disc is just an under 500MB update which is required to play. My game froze in the menus until I installed the update.

My friend told me you can download more songs, some free. They aren't Jpop or Anime songs so I'm not all excited about them.

The game comes with 70 songs out of box and unlike other Taiko games, I LOVE a lot of the songs. Esp the Ryu Theme song! The returning tracks seems to be the most popular songs in the series like Linda Linda!