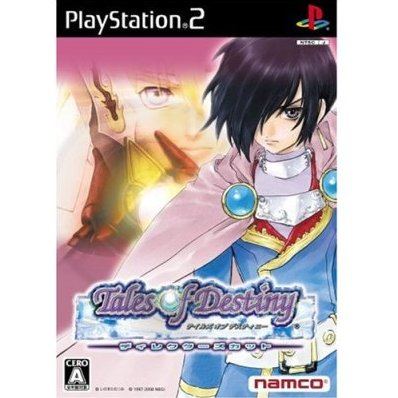 The Tales of Destiny Director's Cut is based on the 2006 released PlayStation2™ game Tales of Destiny with plenty of new features, including a new game mode called the "Lion's Side", which will make Lion Magnus the main character instead of Stan Aileron, a few new events for sub characters, new carry over features, new voice clips, new dungeon hints and even some more battle difficulty levels for all hardcore Tales fans.

If you are familiar with Tales of Destiny Director's Cut, why not let others know?

trunions (151) on 07, Jun. 2011 12:18 (HKT)
Tales Of Destiny directors cut = Awesome
I am a huge Tales of fan, and this game is another great addition to my rather large collection. If you have the means to do so. Do yourself a favor and get this game.
game (63) on 27, Feb. 2011 03:21 (HKT)
Filling that Tales Void
Tales of Destiny was a game I was very looking forward to play. Since my first Tales game was Symphonia on the Gamecube, I was a little late to the series, so I never got to play the original Tales of Destiny. Although when I heard there was a remake of a past Tales game, I finally thought it was my opportunity. There was a point when I didn't have much time for playing, so I never got around to Tales of Destiny until recently, when there had already been a Director's Cut released. So my perspective is not based on the original or original remake.

Whether that would have mattered or not, it is hard to tell, but I can say for sure that I highly enjoyed this game. The gameplay is what you would expect of a Tales game. The environments are set into three distinct areas, the world map, towns, and dungeons. The battle system is of course very enjoyable. I actually really enjoyed the the battles in this game, the pacing was really quick so it always kept my interest.

The visuals in this game are also equally as pleasing. I never grew out of the "sprite" look. Sprites always seem to have a nice aesthetic that adds a lot of character to the game. Especially seeing how far they have come since the SNES era, as the sprites get more detailed and more animated (yet still retaining the "sprite" quality), it begins to look very pretty. It definitely holds true in this game. The sprites are detailed and have fluid animation.

Like many other Tales games, the music is very satisfying. The tracks easily stick in your head and there are some especially enjoyable "town" and "battle" tracks in this game. The sound effects and character voices also help with the pacing of the battles, making everything seem slightly more alive.

I was really impressed with this game. It is one of those games that I definitely want to playthrough again, especially because you can carry over certain statistics. Tales fans who haven't played this one can find a lot of enjoyment here.
edgarcelesff6 (29) on 24, Oct. 2010 01:38 (HKT)
An exelent remake
It has been remade in such a way that is't like it is an entirely new game, and with the script translation guide on the internet you can play it without missing details on this great story
Hayato01 (503) on 21, Jul. 2010 19:29 (HKT)
Great Tales Series
Just got the game and Im loving it. Any tales series fan MUST get this.
Yushuan Shieh (16) on 07, Jul. 2010 10:26 (HKT)
Collector's Choice
If you like the Tales series, well this one should definately be in your collection. the addition of "Leon's Side" is a great contribution to an already great remake.
1 »