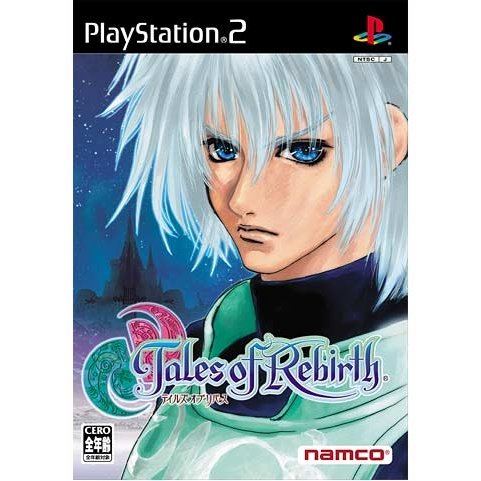 Tales of Rebirth is the next installment in the "Tales" series. The game is set in a world called Callegeia, where Veigue Lungburg is the main character who was raised in Sules. But a darkness is about to overlap the limited peace the world has seen.

Dragon Quest VIII: Sora to Daichi to Norowareshi Himegimi
US$ 74.99

If you are familiar with Tales of Rebirth, why not let others know?

andrescapo_ (177) on 25, Mar. 2013 04:41 (HKT)
Not the best, but still good
I have to say that I didn't really like the battle system, even though the AI of the enemies was one of the best I have seen.
The battles go in like a grid based field, so its not the usual free movement common to the Tales series.
Aside from that, the story is pretty good.
reyjrt (28) on 26, Sep. 2012 15:21 (HKT)
A Very Good Tales of Game
As a fan of 2D JRPGs, this game delivers beautiful graphics, gameplay, and of course, story. I highly recommend this to anyone that is a fan of the genre.
[This review is based on another version of this product]
deserteagle97531 (1) on 15, Aug. 2012 23:10 (HKT)
The most fun I've had with an RPG in years
I'm about halfway through this game but I'm already in love with it. Yeah, the story is a little corny and predictable but still very entertaining.

Where this game truly shines, however, is the gameplay. Simply put, I don't think I've ever had this much with a battle system in any RPG I've ever played. The game really keeps you on your toes and the battles are both challenging and enjoyable.

Don't worry if you can't read Japanese, there are some excellent translation guides out there so that you can fully understand the story and the battle mechanics. If you are even a casual fan of the Tales series, definitely pick this game up while you can still find it!
[This review is based on another version of this product]
hitsuki.eri (2) on 23, May. 2012 14:10 (HKT)
A Tale Overlooked
I have always wanted to play Tales of Rebirth, now I finally had the honor of playing through this masterpiece on PSP!
The battle system was a tad confusing at start, but I quickly adapted to it since I played Tales of Graces f along side it. The FG system to me was similar to Graces' CC system. One could quickly adapt to Rebirth's 3-Line LMBS if they played Tales of Phantasia.
Battle system aside, Tales of Rebirth has to be the coziest Tales game ever! I imagine myself living in every single residential building in the game, as the graphics were very rich. Not a single speck of detail were omitted. Steam coming from hot food and sounds of soup boiling just added something special to the game.
The story of Tales of Rebirth was also a heartfelt one with dynamic characters that enrich the storyline further. My personal favourite characters are Mao, Tytree, and Claire [even though she doesn't fight, she maintains a positive and pro-active attitude even during the darkest times].
Finally, I like most players do feel the soundtrack was a little weak. It is a good soundtrack, just the PSP lowered the quality of the sounds.
Overall, Tales of Rebirth is a Tale Overlooked.
[This review is based on another version of this product]
e_pedraza_g (517) on 14, Apr. 2012 09:41 (HKT)
Portable tales at its best
there's really nothing that needs to be said... if your a tales fan, you know you want this, so just do it... :D
1 »