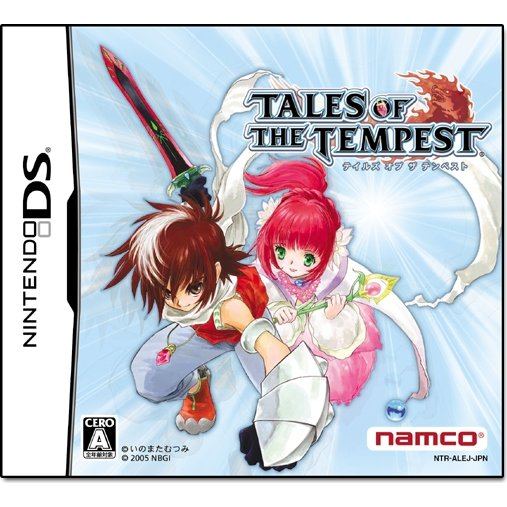 Tales of the Tempest

Works on all systems sold worldwide, a correct regional account may be required for online features.
1w Expected stock arrival within 1 week.
US$39.99
Manufacturer
Bandai Entertainment
Rated By Our Customers
Compatible With Nintendo DS™ (NDS™)
Version

Works on all systems sold worldwide, a correct regional account may be required for online features.
1w Expected stock arrival within 1 week
Price
US$39.99
Play-Asia.com Return & Refund Policy
Click on a thumbnail to see more pictures for Tales of the Tempest

Tales of the Tempest, the first Tales title for the DS concerns Caius, a boy with the ability to unleash the beast inside him, and his quest to find his true parents. The game is presented in 3D and uses a battle system similar to Tales of Rebirth. Enemies and allies are all on 3 lines, with the player switching between them at will. The Touch Screen may be used for special attacks never before seen in the Tales series, allowing lots more variety in battle. The big feature of this game is the ability for certain characters to transform into werewolves, gaining extra power and speed at the cost of techniques.

If you are familiar with Tales of the Tempest, why not let others know?

- Most of music is pretty catchy

- I like how the main character is a werewolf

- The battle system is similar to Tales of Rebirth on the PS2. But not quite as robust.

- There are no vehicles to travel the world map/ and no "quick jump" either. So traveling between towns is a drag, due to the large world map, and the high encounter rate

- The towns are small, and aren't impressive at all. Even the so called "capital" of the world seems compacted.

- You can't use healing artes outside of battle. So you have to rely more on items.

In short, grab it if it cheap, otherwise don't bother.
andrescapo_ (177) on 18, Aug. 2012 08:24 (HKT)
Probably the worst Tales game since Legendia.
Even though I knew it was not a good game, I bought it for collecting purposes, since I'm trying to collect all the Tales stuff I can.

Now, giving a few details about the game, the battle system tries something like in Rebirth, with the line style, pretty much a few steps back from the multi-line system that Symphonia brought.
The story is nothing special, and I didn't like the characters too much either.

As I said, I knew it was not a good game. Only get it for collecting purposes.
andrewwatt65 (22) on 08, Sep. 2011 23:31 (HKT)
How unfortunate...
Sadly, this is one of the worst Tales of series game. As a fan of the series, i am actually very disappointed with the game overall. Graphics was very poor. Comparing to other DS games, the graphics for this game is totally bad. Music was so so. There was not much score that is good and catchy. Luckily, Misono's VS was great! Controls was good, surprisingly. I was a bit worried on how it'd turn out but thank god its quite ok. As for the systems, battle was bad and there was really nothing special. Overall, this is a game for tales of fans only!!!
Kyown (11) on 25, Oct. 2010 12:43 (HKT)
Not Great But Decent
Although it's the black sheep of the tales series it's still holds it's own and is still an enjoyable game.
1 »