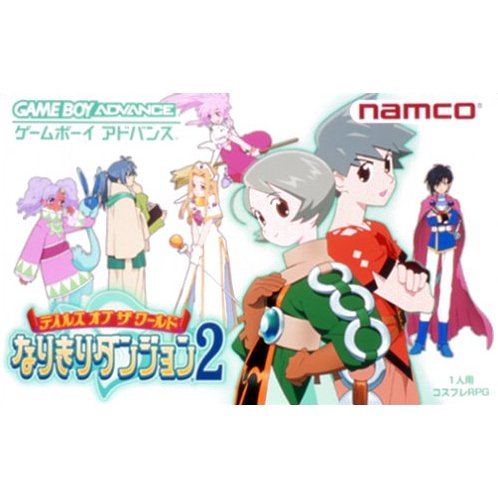 Tales of the World: Narikiri Dungeon 2

Works on all systems sold worldwide, a correct regional account may be required for online features.
1w Expected stock arrival within 1 week
Price
US$58.99
Play-Asia.com Return & Refund Policy
Trustpilot
Trustpilot
Click on a thumbnail to see more pictures for Tales of the World: Narikiri Dungeon 2

Tales of World: Narikiri Dungeons 2 is the sequel of the GameBoy Color Costume play RPG in 2000. The game features a costume change system, which allows you to use different attacks and abilities by swapping your costumes. It is possible to create combination like a "sorcerer with strong physical attack"; there will be over 150 kinds of costumes available.The battle system is similar to the Tales series, up to 3 characters can participate in battles. The game has a free scenario system, you can freely choose the order of the scenarios you want to play, but the subsequent scenarios may change based on the outcome of the scenarios you cleared. The game also adopted the equipment goods and food systems from the Tales of Eternia.The two main characters this time are Kyaro and Furio from the town of Regina, both are 15 years old. They have received the power of "Master" from the Goddess at the Temple of World Tree, to fulfill the request from the Goddess to save the weakening world tree and defeat the increasing demons in the world, before the world is destroyed. The power of "Master" enable them to acquire new abilities and jobs by dressing in different costumes.The Goddess has also summoned brave heroes (from the Tales series) to help the two in their quest. Therefore the game will also features characters from the Tales series. Can you collect all the costumes while adventuring the world with Tales characters?

If you are familiar with Tales of the World: Narikiri Dungeon 2, why not let others know?

lemeinthrigil (6) on 24, Feb. 2009 10:02 (HKT)
Awesome Game
The only problem is, the whole game is in Japanese, including everything on the instruction manual. Now, I really wasn't expecting anything else, and it's still a great game, but unless you spend some time learning Japanese, you won't have any idea what's happening.
Rid Hershel on 14, Dec. 2005 17:56 (HKT)
Great game
It\'s a fun game that will keep you occupied for a long time. I bought it a few weeks ago, and it\'s been fun to pick it up whenever I was bored. Very fun battle system, too.