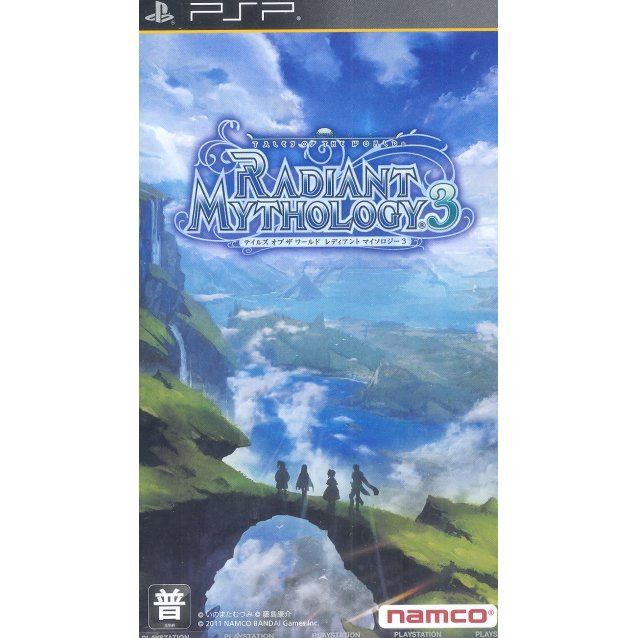 Tales of The World: Radiant Mythology 3

Works on all systems sold worldwide, a correct regional account may be required for online features.
24h In stock, usually ships within 24hrs.
US$9.99
Our previous price:US$ 54.99
You save: US$ 45.00( 82% )
Manufacturer
Bandai Namco Games
Rated By Our Customers
Compatible With Sony PSP™ (PSP™)
Version

Works on all systems sold worldwide, a correct regional account may be required for online features.
24h In stock, usually ships within 24hrs
Price
US$9.99
Our previous price:
US$ 54.99
You save:
US$ 45.00( 82% )
Play-Asia.com Return & Refund Policy
Trustpilot
Trustpilot

Join Canono on her quest to explore the whole world. With sketchbook in hand, the girl seeks to draw all the scenes in Luminesia. Make the flying ship Baneltea your base and enter the guild Adoribitom.Clear missions, win items and team up with the swordsmen, magicians and whatnot in the Tales franchise. There are 50 new characters and 30 of them are player characters, including Asbel, the hero in Tales of Graces.The game adopts the popular free run battle system which gives you complete freedom to strike out, or dodge in the battle field.

Hagane no Renkinjutsushi - Fullmetal Alchemist: Yakusoku no Hi e
US$ 55.90

If you are familiar with Tales of The World: Radiant Mythology 3, why not let others know?

[This review is based on another version of this product]
Lemon (6) on 06, Jun. 2012 03:20 (HKT)
A great way to reconnect with older favourites
RM3 has a lot in common with its predecessors. A large number of old tales favourites are recruited alongside a mysterious pink haired girl and the newborn descender to save the world. For me, The RM sub series has always been fun since you get to use any combo of most of your favourite characters, in a whole new world. This was no exception. I loved this game.

There are more old characters to play with, and the main story is completely voiced. Some of the dungeons were genuinely gorgeous. They also added some new features that really made this game a step above the previous two. The characters you don't use in battle will gain experience up to level 70, which makes it much easier to use whoever you want whenever you want without needing to grind their levels up. Titles come with bonus effects. The crafting system is no longer based on chance but on points, so you can improve your equipment much more effectively in the manner you want to, making it so you can keep wearing your favourite equipment for longer if you like the way it looks. Job changes don't require grade, but instead you can buy bonuses in the grade shop after you beat the main story line. The graphics switched from the 3rd person view of the previous two RMs to a more traditional tales style camera. The over limit system has also been upgraded to include a mode called Radiant Drive which functions like OL in Vesperia, allowing you to chain any combo you like and instantly cast spells, though you can't activate hi-ougis when you use it, and only regular OL will prevent you from staggering when hit. There's also a huge amount of equipment available to wear, tons of super cool looking new armor, weapons, etc. Even after 120 hours, I'm only at about 25% in most item categories.

As for complaints, the dungeon music was almost entirely recycled from older games. Some were cool remixes, but those from the more recent games tended to be just be the original music. My second complaint is that I felt there were too few dungeons, and some of them looked very similar to ones you've already seen. Confeito looked like a continuation of Keiv Moc from Vesperia, and the fact that they used the same music reinforced that. The game was the same length or perhaps longer than RM2, but it has you visiting each dungeon anywhere from 2-5 times for the main story. My final complaint is that because there were so many characters, it felt like most were not involved in the plot. This is hard to avoid when you have so many characters and is the same problem that left me unimpressed with the Suikoden game I played, but RM was better because I already have attachments to the characters beforehand. If another RM came out, I feel they would only have more difficulty managing the numbers, unless they make it for Vita and double or triple the length of the game.

Overall, this game has improved some of the serious short comings of the previous games in the series, and it continued to explain the RM universe, so it was very entertaining for me. Not to mention they allow you to import old save data for titles and entertaining Colosseum missions, which was a great treat for me. For people who enjoyed the previous two, this will not disappoint. For people who disliked the grinding, this game has a lot less of that until after you hit lv 70, so it will probably be much more enjoyable. However, if you don't know at least half of the characters, you might feel like half the game is an inside joke you can't follow because this game was made for fans who want to see their favourite characters again. It's definitely not a starting point for the tales series, and a number of characters are from games that never came out in English, and that is the reason this game will never come out in English. If it does I'll eat my words and buy two copes of it. This game is worth the money if you're invested in the series. If not, you might be better off looking at picking up a mothership title instead. If you want some PSP tales action that doesn't demand you know as much about the characters, Twin Brave might be worth the look, but note that it changed up the battle system a lot and instead of one long narrative, it features 30 smaller stories, and a few other modes.
[This review is based on another version of this product]
legendia21 (11) on 30, Dec. 2011 07:45 (HKT)
Have a favorite Tales cast? It is most likely in here.
This game contains most of the Tales characters of all Tales of games up to and including Graces(pre Xillia) in a Abyss styled battle system and Innocence styled quest system game.

Great crossover game, needless to say that every Tales of fan must have this.
[This review is based on another version of this product]
rchris89 (6) on 05, Sep. 2011 10:30 (HKT)
Review
It just came in today

I love the gameplay and all the character add into this game, plus making your own character is fun

I very happen some of my favorites got in, and can't wait to unlock them for my group