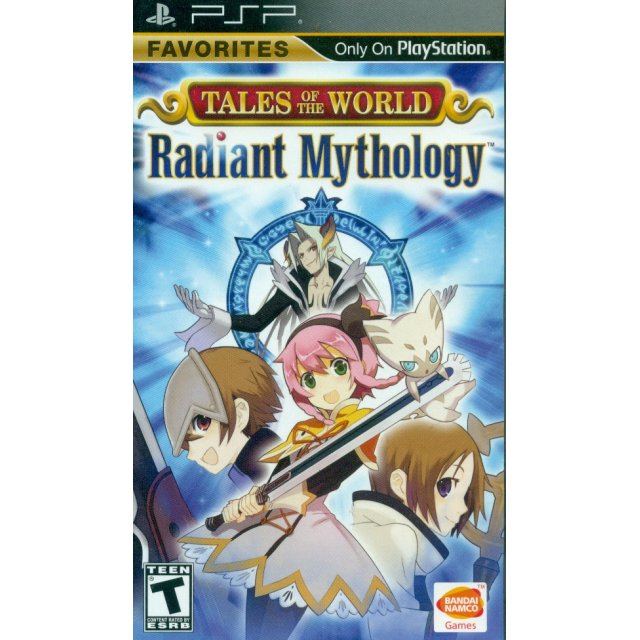 
Click on a thumbnail to see more pictures for Tales of the World: Radiant Mythology (Favorites)

The beloved Tales series is coming to the PlayStation™ Portable system.With its fast-paced, real-time battles, beautiful 3D graphics and extensive character customization, it is the ultimate handheld RPG. Engulf yourself in a world full of quests and heroic adventures anytime, anywhere!The beautiful and prosperous ancient land of Terresia is being destroyed by the Devourer, a demonic creature from another planet. The World Tree, which created and protected this magical land, is wasting away from the Devourer’s continuous attacks. The World Tree uses what’s left of its strength to call on the world’s last hope in a dark battle of survival – you.

If you are familiar with Tales of the World: Radiant Mythology (Favorites), why not let others know?

World faces an evil threat, design your own hero from scratch, venture into dungeons, go on quests with Tales characters, a very good but long game.

Features lots of soundtracks from various Tales of games.
[This review is based on another version of this product]
dmasden (26) on 14, Sep. 2011 10:21 (HKT)
Tales of the world radiant mythology
This game is a little hard to find out where yo need to go and what type of quest you are on if you don't know japanese but with trial and error you can usually figure it out, I recommend this game but it is the hardest one in the series for those of us that don't know how to read japanese, there are not very good faqs for the Japanese version
[This review is based on another version of this product]
penguinegg (63) on 24, Feb. 2011 23:38 (HKT)
Tales of...Tales
I must say that I was very intrigued when I first heard about Tales of the World: Radiant Mythology. I was only familiar with one of the previous Tales of the World games (Summoner's Lineage), but other than that, did not have a really good perspective on what they were like. For those that are not familiar with Radiant Mythology, it is a a spin-off of the Tales series. Radiant Mythology takes characters from the main Tales series and adds them into its own world to create its own unique Tales experience. While I felt the game was not as satisfying as entries from the main series, I still found this game to be overall very solid.

The game starts by creating your own character. I was disappointed in the limited amount of customizations you could make, but it was still a nice touch. The main gameplay revolves around a standard quest system. You accept quests and as you complete them, more become available. And every so often, there will be a quest that advances the story. While I prefer a story to play out as the game progresses rather than through a quest system, if you really think about it, I suppose they are fundamentally the same. Specifically, you must complete pre-requisites to advance. I think that just when a story "plays out" as you go through the game makes everything seem less linear, so maybe that is why it was sort of distracting to me. Regardless, it's not even something that can be called a flaw, but just a preference.

The battle system is very similar to Tales of the Abyss. It has been a few years since I played that game, but everything seems the same, even down to the "shattering" transition from dungeons to battle. And yes, you can still free run to easily avoid and confuse enemies.

Graphically, the game reminded me of Tales of the Abyss too. Of course maybe not as polished as the PS2, but in terms of graphical style and the way the characters are designed, it is most similar to TotA. I even recognized a few of the basic monsters.

The audio was satisfactory. I admit, the music was not as memorable as previous games, but it still sounded like a Tales game. And that is of course a good thing.

There really is nothing wrong with this game. It's a solid Tales game at heart. The only reason it probably feels just a little short of other Tales games is due to personal preference. Another person may love this game just as much as the main series. But personally, it just didn't possess that same feeling that games from the main Tales series have. It's hard to describe, because it really is just a combination of all the elements of the game. In spite of this, I still recommended this game to players who enjoy Tales games.
1 »