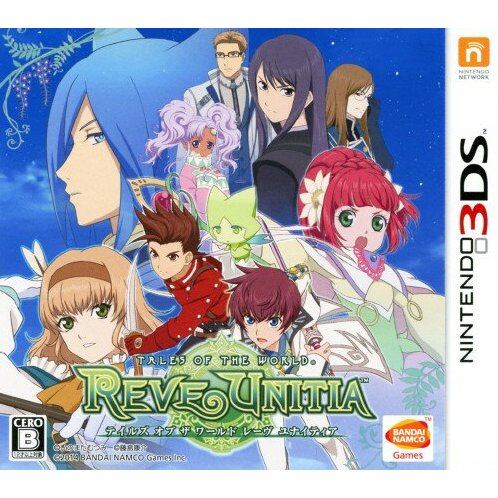 Tales of the World: Reve Unitia

Originally released for iOSTales of the World: Reve Unitiatakesplace in the dream world of Revalia, the existance of which is fueled by the dreams of the inhabitants themselves.Revalia is home tobeings known as the 'Lufres,' who maintain balance in the world by purifying the Vuur which arethe embodiment of bad dreams and wavering hearts.The game's story is split in to the perspectives of a member of the Lufres Tribe,Terun, and a Dream Keeper,Nahato.

Tales of Worlds is Bandai Namco's strategy RPG spinoff of the Tales Of series, where the gameplay is very similar to that of Final Fantasy Tactics. Players move their party across a grid against their opponent after equipping a variety of different weapons and items with unique effects.

Reve Unitiaintroduces new original characters the series while including many familiar faces from the Tales Of series. Desperate times call for desperate measures andthe Lufres havedecided to summon people from what is known as the "Awake World" to fight the Vule - bringing our heroes from past titles to help out!

If you are familiar with Tales of the World: Reve Unitia, why not let others know?

monopoly210 (3) on 25, Apr. 2019 16:21 (HKT)
fun for tales fans
So, first off, this game does not have traditional tales series gameplay. instead, it is what I would call "fire emblem" style gameplay, in other words, turn-based on a grid. I also saw some other reviews stating this is a port of a mobile game and I can believe that considering there are no areas you can freely run around, instead you select missions from a map. that said, the gameplay is fine and let's be honest, is anyone playing the tales of the world games for any reason other than seeing their favorite characters interact? that part is perfect, you start the game with Lloyd from Tales of Symphonia and Asbel from tales of graces and those happen to be my favorite protags from the series. character interactions are spot-on, funny and occasionally heart-warming just like the writing in the main games. now, if you are like me and trying to practice the Japanese language: this game is probably better for intermediate learners than beginners since it uses kanji and there is no furigana. however, the font is very readable and all text boxes are voiced! so if you read along carefully you can identify unknown kanji quickly. and since the battles are turn-based you can take as much time as you want to look things up. I recommend this game, especially to fans of the tales series.
sparklunalunar (19) on 28, Apr. 2016 03:10 (HKT)
Good SRPG
I really like the roster of previous Tale of games characters, the game is simply to control only if you play any previous SRPG games, i recommend this game for fans of Tales of series, like myself that like the characters of Sympphonia and Abyss.
lovekrystal.kor (91) on 25, Mar. 2016 15:01 (HKT)
Great cross-over game
it's not exclusive for 3DS but still great game.
canniengui (70) on 18, Dec. 2015 18:08 (HKT)
Cross-overs are always great
But something about an inflated iOS game feels.. flat.
The best content out of the package is perhaps the DLC and specials included.