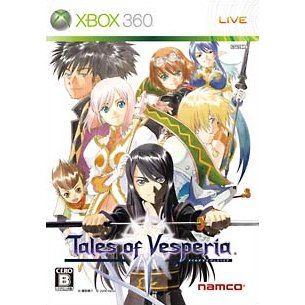 A power struggle begins in a civilization dependant on an ancient technology, the blastia, and the Empire that controls it. The fates of two friends traveling separate paths intertwine in an epic adventure that threatens the existence of all. Tales of Vesperia marks the first Tales RPG release in HD with detail and graphics never before seen in the series. Now, real-time battles are more exciting than ever with over limits, the ability to unleash fatal strikes, combinations and burst artes. The next evolution of the revered role-playing series comes to the Xbox 360®.

If you are familiar with Tales of Vesperia, why not let others know?

jayson1019 (7) on 19, Apr. 2010 06:59 (HKT)
Tales at its best
The "tales of" series has consisted of outstanding rpgs. Tales of Vesperia is no expection. The game is not to easy and not too hard. The graphics are very good and the music is even better. Even after you beat the game, the grade shop with make the 2nd and 3rd playthorugh just as fun if not more. A must have for J-rpg fans.
PuNiao (365) on 03, Oct. 2008 23:25 (HKT)
Tales of Vesperia
On all counts, Tales Of Vesperia should end any arguments, if there are still any, on whether Microsoft's console can deliver the RPG experience that was once the domain of the PlayStation. The Tales Of Vesperia series, from publisher Namco, is unique in its RPG elements in that during battles, players retain full control of characters. Instead of the usual turn-based fights, characters can move around a battlefield and attack enemies any time, in real time. Like the Final Fantasy series, each Vesperia game is a new story and Vesperia has the honor of being the first available for the high-definition console. Using a mix of anime-style cut-scenes, Vesperia is a beautiful game. It does not aim for details but focuses on giving life to characters through their individual mannerisms and expressions. This is a nice change from the usual stoic 3D renderings. Another difference is that, save for the boss battles, there are no random encounters that force you to fight. Enemies appear throughout the game. If you prefer grinding, you can actually pick fights by identifying creatures and, in so doing, tailor battles that suit your skill level. During battles, characters can use regular attacks and Artes. Artes are character-specific moves that can be combined with normal attacks. Constant use of Artes leads to the mastery of new and more powerful moves - from range attacks to group attacks. There are also special skills to be picked up by using certain weapons. Picking up new and more powerful skills is important because the battle is not about strategy or deciding who attacks and casts spells. As players have free roam of the battlefield, there are elements of action games here as players can flank slower moving creatures from the side and easily dodge attacks. Despite the many choices, game control is a breeze as many functions can be pre-set - from the selection of weapons and choice of skill to the actions of teammates. For those interested in the storyline, there is extensive dialogue between characters, though translation has always been one big flaw. The English dialogue is awkward, but this is a trapping of many games translated from Japanese. Still, with side quests galore and a smooth soundtrack, Tales of Vesperia is one story worth repeating.