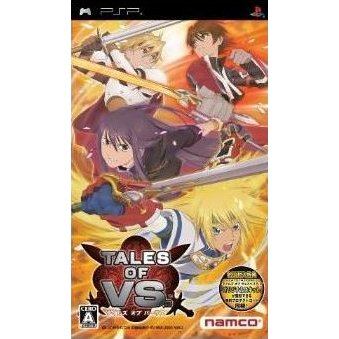 Works on all systems sold worldwide, a correct regional account may be required for online features.
1w Expected stock arrival within 1 week.
US$24.99
Our previous price:US$ 28.49
You save: US$ 3.50( 12% )
Manufacturer
Bandai Namco Games
Rated By Our Customers
1w Expected stock arrival within 1 week
Price
US$24.99
Our previous price:
US$ 28.49
You save:
US$ 3.50( 12% )
Play-Asia.com Return & Refund Policy
Click on a thumbnail to see more pictures for Tales of VS.

Tales of heroes and heroines are debutting on the PSP as fighters. Popular characters, such as Luke, Yuri and Leon are gathered together for various tournaments.Each character has their agendas, be sure to use everyone of them as player characters to learn their skills and individual stories.You don't have to fight alone, or play one to one battles, you can take on 3 opponents at the same time. Fight either against the computer or against your friend through the network mode. Don't worry if you are completely new to the fighting scene, there are tutorials you can follow to learn the sure kill attacks.

If you are familiar with Tales of VS., why not let others know?

ALfromHELLSING (46) on 29, May. 2016 01:42 (HKT)
Fun Tales Series fighter
This is by no means a perfect fighting game, but I wasn't expecting it to be one. Graphics are pretty, gameplay is simple yet fun and it's great to see so many of my favourite Tales Series characters fighting against each other in one game. Enemy AI can be pretty cheap at times but other than I'd say I'm enjoying this game. It's a fun fighter but for Tales Series fans only. Everyone else might wanna think twice before buying.
e_pedraza_g (517) on 25, May. 2016 08:41 (HKT)
Ok game.
Let's face it, what will make you buy this game is Tales of in the title, but for the price it goes, it certainly is not a bad buy
seanadept (9) on 05, Dec. 2014 13:47 (HKT)
Not a bad buy
Not a great fighting game but a fun bit of Tales of fanservice. I got it for collecting purposes so I had no intention of playing it
outerheaven (138) on 14, Oct. 2014 22:24 (HKT)
Nice fighters!
Nice to see all our favourite Tales of characters coming together in a VS fighting game! Tales fans must get it!
andrescapo_ (177) on 06, Sep. 2013 08:17 (HKT)
Acceptable fighter for Tales fans
I mean, what would you expect? This is not meant to compete with Street Fighter and The King of Fighters, its just a spin-off title for us, the fans, to just have some fun pitting Tales characters against each other.
The gameplay is fine, its what you would expect from a game based on the Tales series.