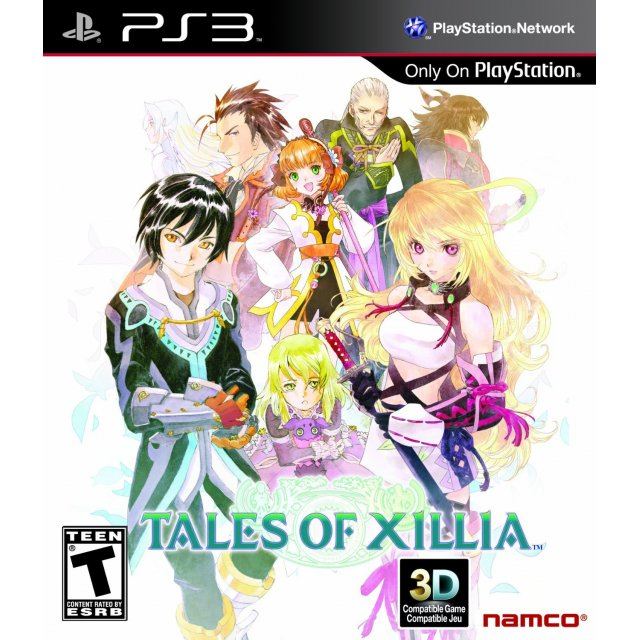 Works on all systems sold worldwide, a correct regional account may be required for online features.
24h In stock, usually ships within 24hrs.
US$19.69
Our previous price:US$ 59.90
You save: US$ 40.21( 67% )
Manufacturer
Bandai Entertainment
Rated By Our Customers
24h In stock, usually ships within 24hrs
Price
US$19.69
Our previous price:
US$ 59.90
You save:
US$ 40.21( 67% )
Play-Asia.com Return & Refund Policy
Trustpilot
Trustpilot
Click on a thumbnail to see more pictures for Tales of Xillia

Designed and written specifically for the PlayStation3, Tales of Xillia is made to be epic. For the first time in the series' history, players can see the game events in the perspective of two characters - Jude and Mira. Although their separate plots lines interweave together, players need to complete the game at least twice to learn the whole story. The simple, yet challenging LMBS system is back, this time, you can use the Link function to do pair attacks on your enemies. Each character has his own special skills, create a gap with one character, and deal the killing blow with the other. Queen of JPop Ayumi Hamasaki wrote and performed the theme song while the animation studio ufotable directed the movie sequences. Tales of Xillia is an adventure no gamers should miss.

If you are familiar with Tales of Xillia, why not let others know?

+:
-Battle System - linear motion battle, linking for cooperative attacks, also a smooth control for attacks/arts from ground and aerial which is a must have that many action games fail to deliver on.
-Main Story - A slightly exceptional student gets caught in a self-proclaimed god's journey to save the entire world. Though this kind of plot isn't a rarity among manga/anime/jrpg stories, it still leaves quite an impact.
-Sub Stories - Alongside the main plot are various stories scattered about the world that shed light on the other party members with their pasts, personalities, and hidden secrets that give the player a chance to connect with and relate to each of the characters, both playable and non-playable.
-Visuals - Incredible scenery and background for many of the worlds, differing from natural, modernized with a fantasy touch, and straight-up modern.

-:
-NG+ exclusive events - you have to beat the game and play through everything to see new stuff?
-Vanishing Enemies - mobs too close to the camera itself turn transparent and eventually invisible, exposing you to un-seeable and thus unpredictable attacks.
-Crossing cinematic dimensions with a snap of a finger - sometimes the scenes will jump between 3d and anime, and repeatedly. Brings a sense of confusion.
-Unnatural movements - there are sometimes crude movements that poke at you when characters make generic rotations to look at others or approach others to start a shared action.
-Linked combat prototype? - When linked characters sit around doing nothing because you're too far from the enemy, it feels like the concept of linking still has room for improvement.

Overall my feeling is pretty much the same as any common review you'll find about any jrpg around: Could be better, could be alot worse. In this case, I lean towards the positive side and aim to see what the sequel can offer.
Neptuniafan1994 (40) on 23, Jul. 2015 18:21 (HKT)
Tales of Xillia!
If you played the previous Tales Of games, definitely try this one, too!

Great story between 2 main characters, they both have a different view in the story!
Linked arts add is lovely!
Character designs and graphics are great!
[This review is based on another version of this product]
lava_princeton (7) on 12, Jul. 2015 01:36 (HKT)
Great game
As a long standing Tales fan, I enjoyed Xillia's fresh combat system and dual protagonists! A must for any Tales fan and a nice starting point for those new to the series.

Pros: Linking made battles all the more fun.
Can switch characters in and out mid-battle.
New game plus with a slightly different angle.
Beautiful visuals and game design.
Lengthy enough story and easy to play.
Lilium Orb was an interesting change.
Entertaining and funny skits which can all be re-watched from the library without waiting until the end.
Lots of sub events.
Very easy and quick platinum trophy for trophy hunters with just one missable trophy, especially when compared to Vesperia, Symphonia and Graces F.
I liked the shop upgrade system as opposed to the usual synthesis method in most other Tales.
Refreshing battle music.

Cons: No puzzles in the dungeons (you just explore, although this might be a good thing for anyone who hates puzzles or getting lost in dungeons).
Lack of in-game costumes.
To eat you have to open the menu each time, a short cut would have been handy. Also there is no cooking.
Linked characters would often just stand there and do nothing, especially when a melee links with a magic user.
Unbalanced link artes, where Milla and Jude had a huge number while the other characters only had 3 or 4.
No grade grinding.
Max level reduced from 200 to 99.


Personal opinion: I liked most if the characters, but I found Jude to be a very weak protagonist who depended and relied on Milla too much, who sharply contrasted to Jude with a very strong personality. Although Jude and Milla's story differ slightly, it's only very slightly and most of it is the same. I kind of wish there was more of a difference as I tend to skip scenes in NG+. NG+ is also necessary to fully understand the story unlike other Tales games.
The game might be a bit on the easy side for veteran fans in terms of dungeons/ maps, bosses and the post game dungeon (although you can alter the battle difficulty at anytime). There is also no EXP bonus from playing on harder modes.

Overall, although not my favourite Xillia is a great JRPG for anyone!
[This review is based on another version of this product]
ernest8192 (14) on 21, Mar. 2015 13:31 (HKT)
Another awesome Tales game!!!
Yet another epic Tales franchise from Namco. Along with beautiful animation, battle mechanics are just what you'd expect from Tales series.

Another new aspect of this game is that you can choose from two main casts and play the game from their perspective which adds depth to the world and replay value.
1 »