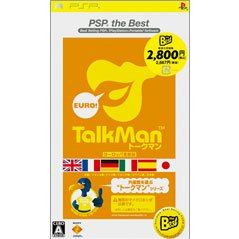 Works on all systems sold worldwide, a correct regional account may be required for online features.
1-2w Expected stock arrival within 1-2 weeks.
US$14.99
Our previous price:US$ 34.90
You save: US$ 19.91( 57% )
Manufacturer
Sony Computer Entertainment
Compatible With Sony PSP™ (PSP™)
Version

Works on all systems sold worldwide, a correct regional account may be required for online features.
1-2w Expected stock arrival within 1-2 weeks
Price
US$14.99
Our previous price:
US$ 34.90
You save:
US$ 19.91( 57% )
Play-Asia.com Return & Refund Policy
Click on a thumbnail to see more pictures for Talkman Euro (PSP the Best)

Thanks to TalkMan - and a large blue multilingual bird called Max, PSP™ is on a mission to break the ice and tear down those barriers that keep nationalities apart. Bring the art of language to your gestures, put words behind the shrugs, turn Spanglish into perfecto Espanol, make the move on the girl or guy in that foreign bar who catches your eye - in short, become a jetsetter able to communicate in six languages with more than 3000 crucial phrases at your fingertips.Following the recent success of the Asian Version, Talkman Euro is now available, supporting 5 European languages (English, Italian, Spanish, German and French) as well as Japanese. TalkMan is the portable language entertainment tool and interactive phrasebook that makes sure you are ready to talk.

If you are familiar with Talkman Euro (PSP the Best), why not let others know?

You will need to have a microphone (which doesn\'t come with this), so I would definitely suggest getting this with the Japanese bundle of the original Talkman. That way, you\'ll have support for a ton of languages, including both Traditional and Simplified Chinese. The only drawback to getting the Asian version of Talkman Euro is that you\'ll be losing the ability to go between Japanese and European languages. Of course, English-Japanese translation is supported on the original Talkman, so that isn\'t really a big deal.