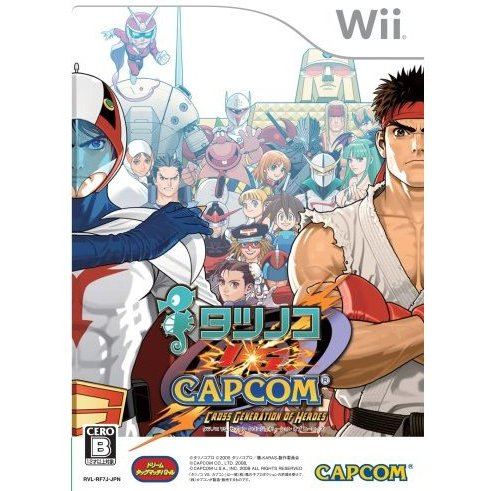 A tag battle opens up a sea of opportunity for gamers. The Cross Generation of Heroes is one massive crossover of a fighting game. More than 16 heroes from Tatsunoko and Capcom fighters make their way into the roster in this Wii installment. The classic hero Ryu, the vampire Morigan, Casshern, and the genie Hakushon are just a few characters who have signed up.Choose two characters from the roster and form a tag team, switch them over to replenish their health when their HP runs low, have them assist each other in the battle and do counter attacks. Get to know the strengths and weaknesses of the characters and form a dream team.

If you are familiar with Tatsunoko vs. Capcom: Cross Generation of Heroes, why not let others know?

Muggshotter (19) on 13, Sep. 2011 03:39 (HKT)
Discovering the origins
I'll just say right off the bat that I'm a sucker for Tatsunoko vs Capcom: Ultimate All-Stars. So with my experience grown to a decent level, I thought about going down the memory lane and find out about the origins of the game I love.

TvC Cross Generation of Heroes' got truckloads of mini-games, a better character select screen (more of a traditional style), character specific themes and Hakushon Daimao - A joke character I seriously had fun trying out. He's just so over-the-top in a funny way and it's a good thing.

The game in general feels a bit more strict about the inputs so I was having tough time getting some decent combos in.

The gallery seems to be a bit better in terms of content: You can actually purchase the character themes with in-game money and listen to them in gallery. Too bad the in-game money itself isn't so quickly earned. There's still plenty of stuff to unlock along the way.

Doronjo and her gang briefly describe the game modes in the main menu and they also invade the in-game shop. It's a nice little thing to have, but I could do without them blabbering on about something.

Speaking of menus, training mode's and options' menus are all in english. That's strange, I was expecting kanji all over place. Well, it certainly helps since CGoH is a lot more of a different. And it's cool, since it makes both installments stand out in their own way.

After this game I wish Hakushon Daimao was in UAS so the playable roster would've felt perfect but hey, that's one more reason to play this game.

If you're a fighting game fan who appreciates various versions of (your favourite) fighters, Cross Generation of Heroes should be a nice addition to your gaming collection. It's outdated, but man is it fun to just casually play around with overpowered stuff.
joseluiscano29 (19) on 21, Aug. 2011 09:04 (HKT)
EPIC!!!
this is the 1 version of the game!!! different from ultimate all stars,this one has an exclusive character(the other one has more characters),original music from tasunoko series and minigames.
if you are a fan of fighting games this is a MUST HAVE!!!!!
poomwood (139) on 05, Aug. 2011 21:13 (HKT)
This is good!
Stand as an illegal child of the Vs. Series, this game has a unique cast. Though the graphics are so-lastgen.....
biorock4891 (83) on 21, Nov. 2010 15:10 (HKT)
Amzaing Fighter and it's on the Wii ¥^_^¥
This is one of the best fighting games I played. I enjoyed every bit of the game. The game is a great addtion to the VS series. Don't miss out on great game.
Kyown (11) on 25, Oct. 2010 12:59 (HKT)
Amazing Cross-Over Game
Easily, the best fighting game on the Wii. Even Street Fighter 4 doesn't compare.
1 »