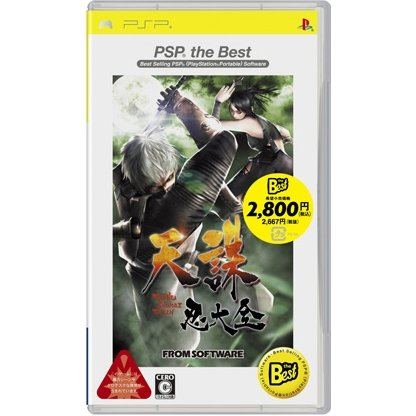 Works on all systems sold worldwide, a correct regional account may be required for online features.
1w Expected stock arrival within 1 week.
US$34.90
Manufacturer
From Software
Compatible With Sony PSP™ (PSP™)
Version

Works on all systems sold worldwide, a correct regional account may be required for online features.
1w Expected stock arrival within 1 week
Price
US$34.90
Play-Asia.com Return & Refund Policy
Click on a thumbnail to see more pictures for Tenchu: Shinobi Taizen (PSP the Best)

After the Disturbance of Tenrai, peace has been restored to the realms of Gohda. But good times sure do not last; the facade of peace hides the suspicious shadows closing on this realm from neighbouring realms. The lord of the realm, Gohda Matsunoshin detected that something strange and hidden had happened, and so he started investigations. Under these conditions of chance, characters everybody is familiar with, Rikimaru, Ayame, Rin and others gathered to serve the lord in these times of need. A battle between ninjas that takes place only in the shadows is about to commence...

The biggest characteristic of the Tenchu series is the stealth kill, silently killing opponents when they are unaware. No matter how strong an enemy is, he can be easily taken care of when he is sneaked up from behind. The thrills of killing enemies with single stokes, coupled with Playstation® Portable’s (PSP®) convenience, can now be enjoyed anywhere by the player with his favorite character. This time, in the story mode, the main characters of past works in the series will be making their appearances. The five playable characters are the familiar Rikimaru and Ayame; Tenchu Kurenai’s Rin; senior Tatsumaru; and assassin Tesshu. With the use of different characters, the plot developments will differ.

This time the game newly adds in the components of cooperative play and versus play modes. With the use of the USB port or Ad Hoc mode, two people can play the game at the same time. There is the cooperative mode in which both players work together to complete a mission, and there is also the versus mode for players to pit against one another. In versus mode, all the useable characters can be chosen. The player can experience fun that is different than that derived from the story mode.

The game features a "mission create mode". Create your very own original missions, including detailed settings such as character settings, plot hints, dialogues, and even terrain changes and positioning of the enemies. The original missions created can be traded or passed on to friends.

If you are familiar with Tenchu: Shinobi Taizen (PSP the Best), why not let others know?

jason.ulrich88 (1) on 06, May. 2011 06:16 (HKT)
This game is great fan service!
This game has not only a bunch of levels but close to 30 characters to play as. Each character has stealth kill animations and this game has a level editor where you can build your own levels or download other player's levels. I love it!!! Anyone who has played any Tenchu games will enjoy it again and again.
DouglasT (82) on 24, Mar. 2010 06:10 (HKT)
Great Game!
If you are a Fan of Tenchu you should buy it. It is a great game. Playable for non-jap gamers as well.