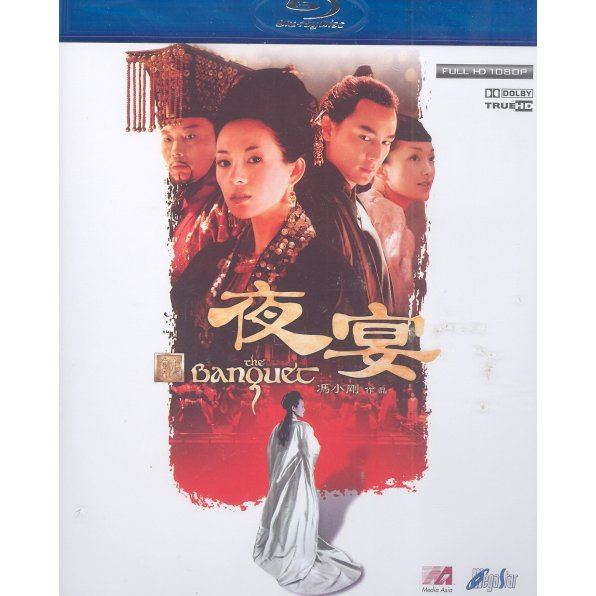 "The Banquet" is set in ancient China during the Period of Five Dynasties and Ten Kingdoms (907-960 AD), when dynasties succeed each other rapidly in the north and a dozen of independent states vie with one another in the south. Meanwhile, the neighboring Khitan Empire is on the prowl in Manchuria, ready to conquer China when the moment arises.Against this background of internal turmoil and external threat lives a legendary queen. As beautiful as she is young, and as limber as she is smart, Empress Wan (Ziyi Zhang) can launch a thousand ships with her charm and fight a hundred soldiers with her sword. But something is lacking in her life. Unfulfilled in her royal boudoir, she harbors forbidden desires for her stepson Prince Wu Luan (Daniel Wu), an introverted and melancholic young man four months her senior, who shies away from the palace to indulge in the ancient art of music and dance.When the Emperor dies all of a sudden and his virile younger brother Li (Ge You) takes over the throne, Wan shocks everyone by agreeing to marry Li, convinced that this is the only way to protect Wu Luan while sealing her own position in the court. But Li is no fool, however infatuated he might be with his sister-in-law, he only pretends to buy into her scheme to consummate his lust. Oblivious to Wan, he has dispatched his guards to kill his nephew.Already devastated by his father death and stunned by his stepmother impending wedding with his uncle, Wu Luan is pushed to the end of his tether when he realizes his own life is being threatened. After warding off the assassination attempt in a ferocious fight scene, he determines to return to the palace and revenge himself by killing his uncle, whom he believes has murdered his father.No sooner has Wu Luan returned to the palace than he finds himself inextricably trapped in a double love triangle: on the one hand, there is Wan, on the other, Qing Nu (Zhou Xun), the daughter of the conniving Grand Marshall. As pure as snow, Qing Nu is head over heels in love with Wu Luan, and she is ready to sacrifice her life for him.When Emperor Li proclaims that a big banquet will be held for his ministers, Wu Luan realizes it is the time to strike. Meanwhile, Empress Wan and the Grand Marshall also have their own plans to hatch...

No reviews for The Banquet yet.