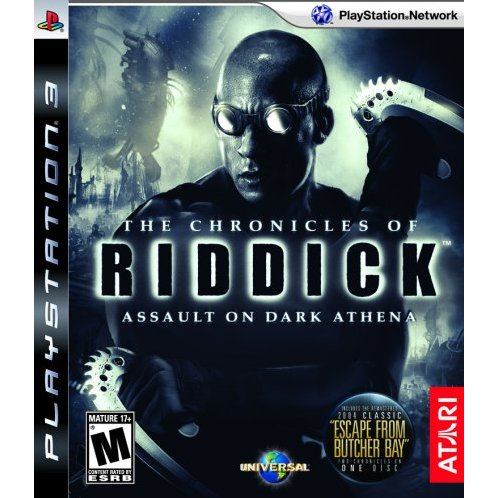 The Chronicles of Riddick: Assault on Dark Athena

Atari
Rated
By Our Customers
Compatible with PlayStation 3™ (PS3™)

Works on all systems sold worldwide, a correct regional account may be required for online features.
1w Expected stock arrival within 1 week.
US$22.99
Our previous price:US$ 24.99
You save: US$ 2.00( 8% )
Manufacturer
Atari
Rated By Our Customers
Compatible With PlayStation 3™ (PS3™)
Version

Works on all systems sold worldwide, a correct regional account may be required for online features.
1w Expected stock arrival within 1 week
Price
US$22.99
Our previous price:
US$ 24.99
You save:
US$ 2.00( 8% )
Play-Asia.com Return & Refund Policy
Click on a thumbnail to see more pictures for The Chronicles of Riddick: Assault on Dark Athena

The most wanted man in the universe slams into gaming!Become Riddick and break out of the galaxy's most deadly prison in this compelling 1st person action experience - The Chronicles of Riddick™: Escape from Butcher Bay.Set before the events of both Universal Pictures' upcoming summer release, The Chronicles of Riddick, starring Vin Diesel, and the 2000 breakout hit Pitch Black, which first introduced Diesel as enigmatic anti-hero Riddick, the game tells the story of Riddick's dramatic escape from the previously inescapable triple max security slam Butcher Bay, home to the most violent prisoners in the universe.

If you are familiar with The Chronicles of Riddick: Assault on Dark Athena, why not let others know?

mik-999 (5) on 08, Feb. 2018 05:05 (HKT)
One of the best games with movie license.
One of the best, coolest movie licensed games available. If you like immersive sims and stealth-action games, give it a try.
Tyrion76 (46) on 21, Jul. 2011 13:01 (HKT)
Not bad, but aged
Still plays nicely enough, but its age shows...
coldice (269) on 24, May. 2011 07:08 (HKT)
Sleeper hit of the previous generation together with a new chapter
Riddick on xbox was a sleeper hit. In the days where movie license games had such a low standards in people's minds the game delivered depth to the story, characters, and the setting which actually made it an essential for the movie franchise fans.

What you have with this disc is the reworked (almost remade) version of the classic Riddick that was released on xbox, and the following chapter.

Gameplay that made the game shine years back is still in tact and still good as ever, and added visual fidelity adds the impact.

However the new chapter is overshadowed by the game that was made years and years ago, and may leave you little disappointed with the 'new' content.

Still a great package and value for those looking for a different take on FPS & Stealth.
fragger59 (9) on 21, Apr. 2011 16:56 (HKT)
Awesome Game
This game is heaps of fun, the stealth parts remind me of arkham asylum, but unfortunately not that good, but still heaps of fun. its always hard to do stealth in a first person game, but they've made it enjoyably with simple visual indicators of your visibility. Gunplay isn't great, but if you play right you can avoid most of the annoyances.