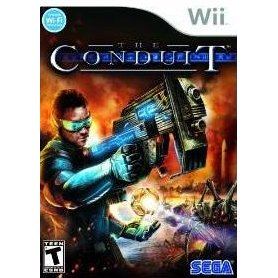 In a fictional near future, Washington D.C. is shaken by several strange events resulting in heightened local and national tensions. John Adams, the enigmatic leader of a shadow organization known as the Trust, realizes that the nation’s capital has come under attack by an alien race called the Drudge. A former Secret Service agent, codenamed "Mr. Ford", is recruited to learn the origins of this attack. The answer Mr. Ford finds is not the one he expects.The Conduit is a fast-paced action First Person Shooter (FPS) set in the near-future of a fictional America. Players battle enemy forces in a highly detailed 3D world using a dynamic control scheme only possible on the Wii.

If you are familiar with The Conduit, why not let others know?

joy_aka_groove (55) on 17, Nov. 2009 17:02 (HKT)
The Best FPS on Wii
The Conduit is one solid FPS game on the Wii, although it offers nothing new in FPS games, but sure, it put the standard for future Wii FPS game. The fully customize control scheme make The Conduit the best Wii FPS out there. It has great graphics for Wii, detailed textire and nice effects. The campaign is nicely done with twisted story at the end. The multiplayer is so good with a lot of weapon choices. Overall, The Conduit is a must have for Wii FPS fans.
videogamebob (27) on 26, Oct. 2009 05:25 (HKT)
Somewhat of a disappointment
This game didn't live up to the hype. The controls are great, yes. Otherwise... the level design is functional, though uninspired. The graphics are impressive at times. The gameplay is limited fun. The story is pretty generic. Worth a play-through, but not a top-tier title.
tank2000 (53) on 01, Sep. 2009 16:06 (HKT)
Good FPS, but could be better
Despite a lot of expectations for this game, The Conduit is in the end, a good, but not outstanding first person shooter. On the positive side, the extreme customisability of the control scheme is by far the best thing about The Conduit. One feels that the game could have done with a bit more variety and an injection of something more unique because as it stands, it's a fun, but rather bland shooter