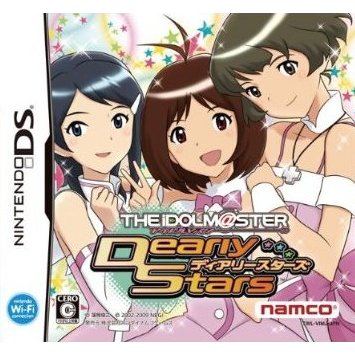 Works on all systems sold worldwide, a correct regional account may be required for online features.
"DSi Enhanced" titles are usually region locked on DSi Consoles.
24h In stock, usually ships within 24hrs. (Only 1 left in stock.)
US$66.98
Limited time offer - Secure yours now before the offer expires!

Works on all systems sold worldwide, a correct regional account may be required for online features."DSi Enhanced" titles are usually region locked on DSi Consoles.
24h In stock, usually ships within 24hrs
(Only 1 left in stock.)
Price
US$66.98
Our previous price:
US$ 74.99
You save:
US$ 8.01( 11% )
Play-Asia.com Return & Refund Policy
Click on a thumbnail to see more pictures for The Idolm@ster: Dearly Stars

Dearly Stars switched the point of view from the producer to the idols themselves. This time you are not just in the back stage cheering them on, you interact with the production company, go to auditions and win the roles yourself.Fear not, for you are not alone. Established idols such as Amane Haruka will show up to guide you along. Listen to their advice and see how your meeting with them will change your path.Be sure to interact with the other two new idols who entered the company with you. In the world of entertainment, you can't live alone, network with your competitors, for they could be your ally some day.

Jake Hunter Detective Story: Memories of the Past
US$ 32.99

If you are familiar with The Idolm@ster: Dearly Stars, why not let others know?

the main difference is you play as the idol rather than the producer and the game progresses in days rather in weeks. the audition part is a bit weird because you only roll the roulette instead of trying to appeall all the judges

the story is pretty good, I personally liked the Ryo's side of the game. If you understand japanese you will like the story.

so, if you're a fan of VN or simulation or a hybrid of the two, you would like this game
Ashutei (24) on 20, Aug. 2010 00:22 (HKT)
The best IDOL simulation game.
In game you are Producer. You can trainning your idol and change her Clothing. Your Idol will dance and Sing in Audition scene with 3D visual modelling.
awe.of.she.1 (173) on 30, Mar. 2010 12:41 (HKT)
Different from the other games...
...but still a worthwhile experience, if you are a fan of the games. You take the perspective of the idol this time around, rather than the producer. If you're new to the series, I'd say it's still worth starting on this one, as it is a (somewhat) cheaper alternative, but you will not have the same kind of experience that you would with the 360 games. Keep that in mind.

It's also worth noting, that if you're a little slow on Japanese, this version has no more auto-scroll text or timed decisions, as opposed to the 360 versions.
cataraina (2) on 26, Mar. 2010 06:21 (HKT)
its pretty good
This game was my first foray into the idolm@ster series. I'm not a native japanese speaker so the story is a little daunting to me, but i like how the idols are all fully voiced but i wish everyone else was too it would help me understand more. Its pretty easy to navigate tho because there is english sprinkled about. The minigames are fun except for the lyrics one because i fail everytime >_
Soremonanashida (12) on 14, Oct. 2009 18:54 (HKT)
Decent
Story is decent but nothing special. Very few songs (10 per character). Fans of the series will find nothing they liked before here, and may even be upset at how some old characters are handled. Audition parts are extremely badly done and left me questioning their purpose; They seem to serve none aside from being route split points which could be done in a dozen other ways.