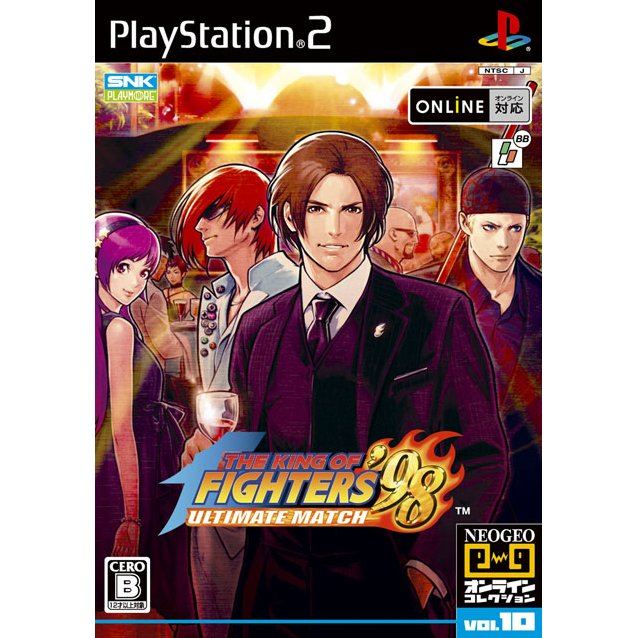 The King of Fighters '98 Ultimate Match

SNK Playmore
Rated
By Our Customers
Compatible with PlayStation 2™ (PS2™)
For JPN/Asian systems only.

sold Out of print / Out of stock.
Manufacturer
SNK Playmore
Rated By Our Customers
Compatible With PlayStation 2™ (PS2™)
Version

Volume 10 of the Neo Geo Collection arrives and it's a 10th anniversary title: The King of Fighters 98 Ultimate Match. King of Fighters returns with a surplus of features to renergize the original KOF dream match. A complete character roster including the 96 Boss Team (Geese, Krauser and Mr. Big), as well as Eiji, Kasumi, Goenitz, and Orochi join the fight. The Advanced and Extra games modes are back as well as a new "Ultimate" mode that allows for customization of the fighters abilities. New moves, new backgrounds, rearranged music, color edit, and online playability make this title a must have.更なる進化を遂げたKOF'98、早くもPlayStation®2に登場！キミの部屋で“究極の闘い”を遊び尽くせ！！●通常キャラ＋裏キャラ＋ボスキャラ＝全64名が使用可能！アーケード版を上回る最多のプレイヤーキャラ数を実現！！●新システム“アルティメットモード”搭載！戦闘スタイルを自由にカスタマイズ！！●各種グラフィックにも追加や変更が！ ゲームバランス等もバッチリ再調整！！●10年の時を越えて完全再現！ 懐かしのネオジオ版「KOF'98」も収録！！他にも、こんなPlayStation®2オリジナル機能を搭載！●マルチマッチングBBで全国のユーザーとオンライン対戦が可能！●ゲームに登場する全ステージを2D版と3D版に切り替え可能！●ファン必聴のアレンジBGMや懐かしいボーカル入りBGMを追加！●デモやイラスト、連続技動画等を楽しめるギャラリーモード！●設定を自由に変えながら練習できるプラクティスモード！●自分の好きな色のキャラが作れるキャラクターエディット！

The King of Fighters Nests (Neo Geo Online collection The Best)
US$ 58.99

If you are familiar with The King of Fighters '98 Ultimate Match, why not let others know?

The most incredible cast in any fighting game (and not only KOF), amazing 2D and 3D backgrounds, a more-than-complete soundtrack with arrange option, wonderfull controls. Need more? Color Edit mode, challenging missions, different bosses to fight according to your perfomance. Want to fight some simple vs matches, but don't have nobody to fight with? No problem, fight against CPU.

Take it, and take it NOW. The rest... are just the rest.
darkhowardkrockhoward (20) on 15, Jul. 2008 00:12 (HKT)
Perfect game!
It is a masterpiece that game, The King of Fighters best in history, which was already the best get many now leaves no doubt.
Played the game of my colleague, when I bought my own here in Play-Asia enough.

To those who like to KOF, can not lose any way that is the wonder that The King of Fighters'98 Ultimate Match.
Su (2) on 10, Jul. 2008 06:55 (HKT)
The King of Fighters ’98 Ultimate Match
A classic 2D three on three versus fighting game enlivened with several additions to the already extensive options in the original game system. More refined then it’s predecessors, yes, there where more successors to the original. The original is also included in this version. If you do not like three on three, there is also an one on one mode.

In the majority of the world this game has been overshadowed by the versus fighting games from Capcom. While they also have good games and a classic is going to be revamped in the form of “Super Street Fighter II Turbo HD Remix”, those games will appeal to the masses by name alone. Please give “The King of Fighters ‘98 Ultimate Match” a chance.

SNK delivered the solid game system in the forms of “Advanced Mode” (reward) and “Extra Mode” (risk). These systems decide the basic options your chosen characters will have. This version has “Ultimate Mode” where you can mix and match the options from the two earlier systems. A roster of sixty-four characters will keep you quite busy. SNK Playmore was smart enough to not just port it out.

Instant active and counter-active action is set to an higher level with the many Guard Cancel options it has to offer. Which means when you let your character defend itself, you can take instant counter-action instead of waiting on the opponent to get tired or make a mistake.

The intricacy of the game system is very adventurous. The game is a participant for “Tougeki Super Battle Opera 2008”. It is that good. I wish it was in the “World Cyber Games”.

The only thing that I find regrettable is that the online option is for Japan only. They should make it worldwide. They could make a self-host system.
Where one player hosts and someone else joins. And that even when you are hosting , your able to join someone. Sadly to say that this will be a point of downfall for the game.

If you like versus fighting games, this is a must have.
It is one of the most complete 2D versus fighting game in existence.
If you do not like versus fighting games, please try it.
It is a proven concept that aged well for almost ten years. The ten years of experience are put in to this game.
chonrei (5) on 06, Jul. 2008 00:31 (HKT)
Good game
The game is definitely tournament ready. Playmore did the best they could on this one but the game is only slightly more balanced than before. Iori and EX Geese are tops. EX mode grabs should take priority since you can't throw evade. They shouldn't have added a waiting period between supers when bar is flashing. SNKP still didn't get it balanced across the board. It's a fun game nonetheless, but I wouldn't agree with the other user saying 98's the best. I think XI is SNK's finest attempt to date. To mate w/ UM's backgrounds, they should have cleaned up the graphics like ReBout.
li_spark (5) on 04, Jul. 2008 11:43 (HKT)
The best KOF game
The best KOF game you must have
1 »