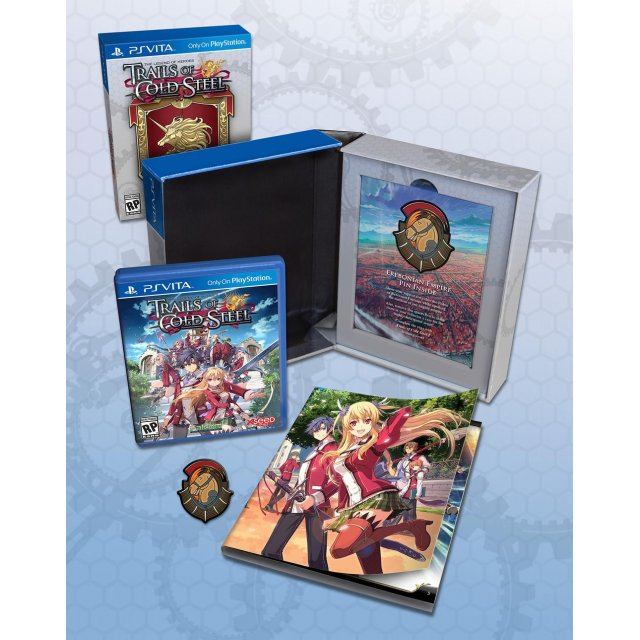 The Legend of Heroes: Trails of Cold Steel (Lionheart Edition)

Taking place on the same continent as the fan favorite Trails in the Sky offshoot of Nihon Falcom's storied The Legend of Heroes franchise, Trails of Cold Steel (Sen no Kiseki in Japanese) is the first in the series to tread Erebonian soil and explore the inner political conflicts of this oft-mentioned powerhouse nation in detail. With a standalone story that also delves into the expansive lore that has become synonymous with the series, players can enjoy school life and bond with fellow students to earn new abilities in battle, take advantage of speedy, tactical turn-based combat with the newly-developed "ARCUS" system, and take part in dramatic events that stand to shift the balance of power between Erebonia's feuding nobility and commoners.

The Legend of Heroes: Trails of Cold Steel (Lionheart Edition):

“Lionheart Edition” contains an art book featuring over 100 pages of art from the game as well as its sequel, The Legend of Heroes: Trails of Cold Steel II, and a 1.5” pin displaying the emblem of the country of Erebonia, packaged with the game in a custom collectible clamshell-type box that will also be able to house the sequel when it releases in 2016 so that collectors can store the initial Cold Steel duology in a single package.

If you are familiar with The Legend of Heroes: Trails of Cold Steel (Lionheart Edition), why not let others know?

rafelcruz_inu (8) on 12, Feb. 2017 04:56 (HKT)
Excellent edition
An excellent JRPG turn-based game. But what I really wanted was to have this edition so beautiful.
Goldring (11) on 14, Jan. 2017 19:39 (HKT)
The best RPG for the Vita
This game has been able to bind me over 50 hours. Why ? Because the story, paired with very good graphics, super animations and wonderful characters excellence harmonize. This game is timeless and will also be remembered in 20-30 years. Not having this game in his RPG collection is a crime.
Quentin D. Skylar (92) on 29, Aug. 2016 19:44 (HKT)
oh yeah..
i will not talk about game or gameplay.. but this limited edition has something unexpected.. a pin inside.. art book also great.. i was just really happy when I saw a pin inside..
achiebles (3) on 06, Apr. 2016 07:08 (HKT)
Brought back my love for turn-based RPG
This game is really good. First playthrough got me playing for more than a 100 hrs! Story is great, with lovable characters and villains alike (the NPCs also has their own share of stories so be sure to talk to everyone!) OST is also nice, made me wish XSEED games included an OST cd in this edition.

As for the Lionheart edition, it is worth every penny. The Lionheart Edition has this wonderful art book (spoiler alert for the 2nd game so be wary when browsing). Kinda reminded me of the art book in the Corpse Party Blood Drive: Ever After Edition. It also has an Erebonian emblem pin which is really nice.