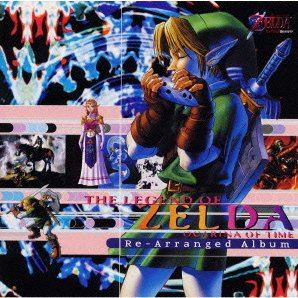 The Legend Of Zelda Ocarina Of Time Rearrange Soundtrack

The Legend of Zelda game soundtrack album. It contains newly recorded music whose production was supervised and approved officially by Nintendo. It also includes the original theme song.

The Legend of Zelda - The Wind Waker Original Sound Tracks
US$ 31.99

If you are familiar with The Legend Of Zelda Ocarina Of Time Rearrange Soundtrack, why not let others know?

Zepherie61 (9) on 05, Nov. 2006 11:06 (HKT)
Listen to the familiar sounds of Hyrule...remixed!
This CD is great to listen to with friends or if you need to get motivated. This Cd has only twelve tracks but each track is over four minutes. The longest track is the Hyrule Field theme being almost six minutes long. The shortest the Lost Woods being three minutes and twenty two seconds long meaning plenty of music to listen to. Another great CD to buy for any Zelda fan. Each track is remixed with added sounds and music. Some tracks like Battle and the Ttle theme you won\'t recognize at first. Listen carefully and you\'ll remember. Lon Lon is very special. It has singing in it! Very good singing. It\'s in Japanese of course but the voice is beautiful. It also allows you to hear the correct way to say Epona\'s name becuse so many people say it wrong. I would like to thank AOL radio for having a VideogameScores station. That\'s how I learned what some of the tracks sounded like, thus I bought it. This is a great CD to buy with the Ocarina of Time Original Soundtrack.