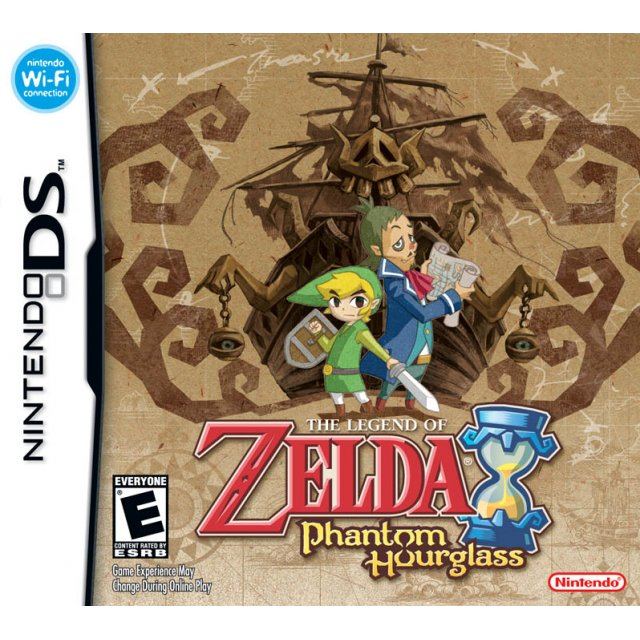 sold Out of print / Out of stock.
Manufacturer
Nintendo
Rated By Our Customers
Compatible With Nintendo DS™ (NDS™)
Version


Click on a thumbnail to see more pictures for The Legend of Zelda: Phantom Hourglass

The Legend of Zelda®: Wind Waker™ closed with Link and Tetra setting sail for waters unknown ... but their story was just beginning, and it continues on the Nintendo DS. When a mysterious fog waylays their band of pirates and leaves Link alone on an unfamiliar island, a new adventure begins.Link, Tetra and Tetra's band of pirates have set sail in search of new lands at the end of the Wind Waker adventure. Several months later, they come across a patch of ocean covered in a dense fog, in which they discover a mysterious ghost ship. Tetra falls into danger when she sets out to explore the ship alone, and Link falls into the ocean when he attempts to rescue her. When he washes up unconscious, he is awakened by the sound of a fairy's voice. With the aid of this fairy and other allies, he sets off to explore waters uknown.

If you are familiar with The Legend of Zelda: Phantom Hourglass, why not let others know?

sergiovillicaa (92) on 30, Mar. 2015 22:21 (HKT)
Nice game
What to say, this a legend of zelda game, you know what that means, old school dungeons,mand many weapons, this is a great game. The graphics are full 3d, they are not super detail, it looks like playstation quality but very impresive to see this in the nintendo 3ds, the controls are a little different, you have to control with stylus, at the beginning feels a little strange you point a place and link walks there, if a enemy is close just cross a line over the enemy and link will attack, while walking if you make a circle with the stylus link will do a roll. So this is classic zelda game with new game play, I dont get used yet, but still the game has good quality as always. I had this game before I sold it because I thought it was not so good, I regret so much selling it, I am so glad I was able to find it in play asia. Thanks a lot PA.
freeaxer (4) on 21, Oct. 2014 20:53 (HKT)
Link - a Hero of Pirates
Certainly not the most famous part of Zelda series, but still an awesome game, even if you never played Wind Waker - a prequel. You'll use stylus and microphone extensively, which is tons of fun!
carlosreis978 (57) on 16, Sep. 2014 05:06 (HKT)
great zelda game
its a game for fans.
use the touch pad very well