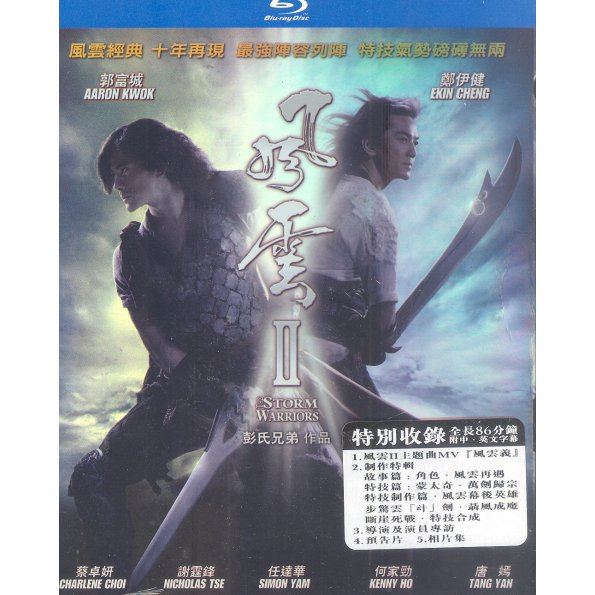 sold Out of print / Out of stock.
Please take note that, once purchased, this item must be paid immediately and cannot be cancelled or returned.
Manufacturer
Universe Laser & Video
Feature
Ekin Cheng, Aaron Kwok, Charlene Choi, Nicolas Tse, Simon Yam
Rated By Our Customers
Version

Evil warlord Lord Godless desired to conquer China. He imprisoned a large number of martial artists and tried to make them subjugate. Among the prisoners were Cloud and the martial arts elder statesman Nameless. Wind came to the rescue. The trio was badly wounded by Lord Godless's evil martial arts attack. Chu Chu was also knocked out when she blocked Cloud from Lord Godless's strike. The remaining martial artists sacrificed their lives to save the trio, in the hope that the trio would beat Lord Godless one day and save the country.

Chu Chu was badly wounded and stayed unconscious. Cloud was filled with remorse and vowed to take revenge. Wind chose to take the evil way to quickly boost up his martial arts skills, so that he could protect the people. During his training, he met the girl who changed his life, Dream. Meanwhile, the troop of Lord Godless came to attack. Wind's training was interrupted when he tried to save Dream from Lord Godless's assault. After some killings, Wind ran away and disappeared....

Lord Godless took The Emperor in captivity and stationed his troops in Heaven Cave. Cloud arrived alone and started a combat with Lord Godless. Lord Godless had the upper hand. In the meantime, the half-evil Wind appeared and joined the battle. During the fight, they inadvertently discovered the secret of the sovereign.

The real intention of Lord Godless's invasion was related to an ancient tomb, a forbidden ground buried with the Royal family's secret. The truth was finally revealed. At last, how would the battle end? Who would eventually rule over the country?

If you are familiar with The Storm Warriors, why not let others know?

Other cast in this movie also protray their character well . Great graphic effects but the storyline is so so .